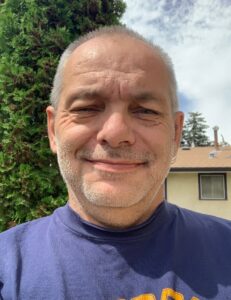 It is with great sadness that the family of Dominique Joseph Pontes announces Dominiqueâ€™s sudden passing, at age 56, on the morning of Friday, June 12, 2020.

Born in Cahors, France on May 1st, 1964 to proud parents Rosaria and JosÃ© Pontes, Dominique lived much of his early childhood playing in the village of Douelle, France with his sister Brigitte and brother HervÃ©. Dominique immigrated with his family to Calgary in 1970 where he quickly adapted to a much colder climate and a Canadian lifestyle. Completing most of his schooling in Calgary, Dominique graduated from Father Lacombe High School in 1983. At that time, he was often seen riding his motorcycle and spending time with his cousin Thelis Martins and good friends Hermann Muller and Andrew Kenyon. Dominique pursued a career as a Dental Technician that eventually led him to owning and operating his own business. During the early 1990s, he met many of his life long and dearest friends working for the security company, LCS.

Dominique will be dearly missed by his mother Rosaria and stepfather Antero Teixeira; his three daughters, Brittany Pontes (Raymond Tran), Alesha Pontes (Bryce Motley), Emily Pontes and their mother Colleen Pontes; his two sons, Joshua Wong-Pontes and Jonah Wong-Pontes and their mother Sue Ann Wong; his sister Brigitte Pontes-Wenn and her two sons, Phillip Wenn and Alexander Wenn; his brother HervÃ© Pontes; his aunt and uncle, Isolina and Carlos Martins and their children, Annie Martins-Boychuk and Thelis (Tracy) Martins and respective families. He will also be missed by his numerous cousins, extended family and his many friends all near and far.

Dominique will always be remembered for his sense of humor and his ability to light up a room. He loved watching his favorite football team, the Seattle Seahawks, and cheering on the Calgary Flames. His favorite hobby was repairing and modifying his 1985 Ford Mustang GT Convertible which he cherished almost as much as his own family. Dominique left his family and friends much too soon and will leave a void in the hearts of those who knew him.

In Lieu of flowers, the family is asking that you donate to the Heart and Stroke foundation in memory of Dominique.

â€œDon’t cry because it’s over, smile because it happened.â€ – Dr. Seuss

***Due to COVID-19, the funeral home has asked that no more than 30 people be gathered inside the building at one time. Those wishing to pay respects are more than welcome to wait outside the building until there are under 30 people. St. Marys has asked that no more than 100 people be outside at the burial service, guests in excess of 100 people will still be welcome to attend but will be asked to view from inside their vehicles. Face masks will be required to be worn at both the funeral home and cemetery, and guests are encouraged to wash their hands and use hand sanitizer as needed.***