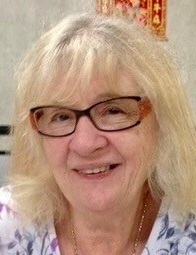 Patricia Irene (Cummins) Unique passed away on March 1, 2021 in Calgary, Alberta at the age of 77 after a brief illness. She was born in Calgary in 1944, the eldest child of Donald Blair Cummins and Irene Johnson. She spent most of her growing up and school years in Calgary. Pat married William Rachar in November 1964 and they were blessed with 6 children, including twin boys. One of the twins, Jeremy Bruce, died tragically of SIDS at 5 months old. During her marriage to Bill, their family lived in Calgary, Red Deer, and Edmonton before settling in Regina where Pat was a mother and homemaker. After her divorce from Bill in 1979, Pat went to school to become a large engine mechanic to try to support herself. These were some years of financial struggle raising her children as a single mother. She briefly got remarried to Larry Unique of Regina. Eventually, after the children were grown, she became an LPN (licensed practical nurse) and moved back to Calgary. For the next several year, Pat worked providing care for people in their homes who had health issues including paraplegics. This led her eventually caring for people with similar issues in her own home for many years.

Pat could be a shy person before you got to know her but once familiar, she was gregarious and talkative. Pat had a BIG heart and a hearty laugh. She loved going out to lunch and visiting with friends. She liked to go to plays and concerts too. But her biggest passion was shopping to find a bargain. And she was a MASTER at it. She could have taught classes about it. This fed into her another of her passions which was shoes and purses.

Pat was a good cook and an excellent baker. She made an amazing lemon meringue pie with crust from scratch. She was also pretty obsessed with making sure she always had enough groceries for long term storage and to feed anyone who might come to visit and to share with family members. She could not stand to see any food wasted, hence her fridge was well stocked in leftovers. She loved diet Pepsi- but only with ice. She was obsessed with having ice in her drinks.

She was a true romantic. She was a die hard fan of Hallmark movies, reality talent shows, soap operas and Elvis. She had a big soft spot for the underdog. She was also an avid reader especially of mysteries. She was quite sentimental about her â€œstuffâ€ and saying she had a hard time parting with anything that had a memory attached to it would be a huge understatement. But she was also very generous- constantly using her talents to crotchet afghans for babies and hunting for special gifts for people that she would squirrel away. Pat was loyal, honest and thoughtful.

Family was an important priority for Pat- immediate and extended. She kept in touch with aunts, uncles, cousins, nephews and nieces. Her children and grandchildren met monthly to celebrate birthdays and other holidays. They saw each other often and she talked on the the phone regularly to her two sisters. She was exceptionally close to her mother, Irene Palmer, who she lived with for several years.

Pat was a life long member of the Church of Jesus Christ of Latter-day Saints. She taught Primary for several years to the 9-11 year old girls. This was her favorite calling and she adored those girls and kept in touch with many as they grew older.

Patâ€™s super power was her hearing. She had the ability to hear what anyone said anywhere in the house- even if they were whispering. This allowed her to deal with her FOMO: fear of missing out on anything fun that might be happening.

Due to the current pandemic restrictions and protocols, the funeral is restricted to close family. It will be held at the Pierson’s Funeral Home (4121 – 17 Avenue SE, Calgary) on March 12 at 3PM. Friends are invited to view the livestream of Patricia’s service by selecting the Watch Event link below.

In lieu of flowers, please consider donating to The Heart and Stroke Foundation of Canada.