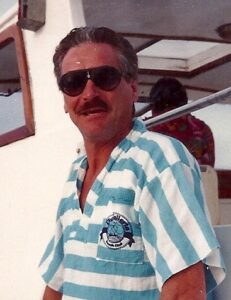 Donald was born in High River, Alberta and passed away in Calgary at age 70. He was the youngest and only son of George and Dorothy Silvius. He had three older sisters who may have occasionally tormented him but were also fiercely protective of their brother.

Donald lived and worked in Vancouver for many years, however Calgary has been home for the past 22 years. He enjoyed reading, watching crime shows on TV and cheering for the Calgary Stampeders and Calgary Flames. He was intelligent, had a great sense of humour and was truly grateful for small kindnesses shown toward him in his later years.

One of his favourite places to travel was Hawaii. A TV series called â€œMagnum PIâ€ was filmed in Hawaii in the 80s and starred Tom Selleck, Donald was frequently mistaken for the actor when he vacationed there. His last big vacation was to Puerto Vallarta with his sisters & their families where they shared many happy adventures together.

Donald is survived by sisters Norma Fehr (Ford) and nephews Wayne & Sean, Linda Cooper (Brian) and nephew Cody, niece Brittany. He was predeceased by his sister Shirley Penner and also survived by her children, nephew Michael and nieces Teresa and Barbara.

Donald will be missed and will not be forgotten by those who loved him.