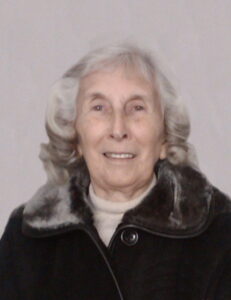 She was predeceased by her husband Ian Inigo-Jones and parents Whitney Earl Dickson and Violet Bertha Lilian Dickson (nee Cross). She would also want to remember her brother-in-law Lorne Smith, who also passed recently and showed her much kindness over the years.

Shirley was born in Detroit, Michigan, and raised in Westboro, Ontario, now part of Ottawa. She spent many summers with the Cross family in Vankleek Hill and Dalkeith, east of Ottawa.

These were always some of her favourite memories. It was in Dalkeith that her love of trains began, with her uncle Dan, station master for CN Rail, getting her free rides and letting her play with her dolls in the station waiting room.

She graduated from Nepean High School and then Carleton University. Shortly after, she met and married Ian. It was through Ian that Shirley discovered a love for motorcycles, touring around parts of Ontario and Quebec on a 600 c.c. single-cylinder AJS they called Annabelle.

Ian and Shirley had four children and in 1966 moved to England where they raised them. All three of her boys inherited a love of motorcycling. In her 60s, she was delighted when her son Randy took her for a ride outside Calgary on his Harley-Davidson.

Shirley loved children. After raising her own, she would nanny for other families. She also loved her dog Scamp and her cat Spotty. Many an evening would be spent in England with one pet on each side of her, keeping her warm. Why put the heat up when you have pets? Picture her with a Dorothy L. Sayers mystery novel in one hand (Lord Peter Wimsey was her favourite) and toast and peanut butter in the other, with Scamp desperately pawing at her arm for his share of the toast. She never disappointed him.

Her evenings would end with her taking Scamp for a late-night walk (often with the cat following behind), usually looking for her then teenaged or young adult children to get home safely before she could go to sleep. As a child herself, Shirley would say she could never get to sleep until all of her dolls were tucked in safely for the night. That pattern continued when she had real babies to care for, even after those babies grew into adulthood.

Later, when she moved back to Westboro to care for her mother, the tables were turned. Her mother would not sleep until Shirley got home. Even when youâ€™re 60, you are still your motherâ€™s child.

After her mother passed, she made Calgary her home, where two of her sons lived.

Shirley’s family would like to express their gratitude to the staff of Carewest Colonel Belcher for the kind and compassionate care shown to her. Private family services will be held for Shirley.