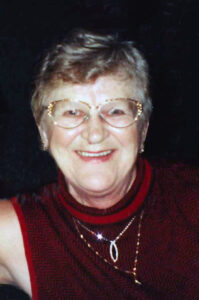 It is with great sadness that we announce the passing of Joan at the age of 79 years. After years of health issues God said, “Enough suffering. Joan, I am bringing you home.” Joan will forever live in the hearts and minds of Bryan, her husband of 58 years, and their four sons, Barry (Kathie), Kelly (Vickie), Scott (Cathy), and Robert. Time spent with Grandma will be lovingly remembered and missed by grandchildren, Ashley, Bradly, Maria, Alexander, Evin, Angela, Raymond, Calvin, Francis, Angelina, Maia, and Emma; nieces and nephews, Jim (Mitzi), Allen (Patricia), Darell (Judy), Trevor (Tracey), Neil, Mary-Jane, Jason (Lea), Terry, Susan, and Teddy; and brother, Keith (Joy). Joan was predeceased by her parents, William and Louise Meyer; her precious sister, Isabel; and her nephew, William “Billy.” Bryan and Joan were married in St.Paul’s Cathedral in Saskatoon. In 1961 they moved to Winnipeg and 16 years later, to Calgary. Joan was always a busy homemaker. She could not watch TV without knitting, crocheting, typing for a court reporter, secretary to a football team, etc. She loved going to the cottage; especially spending school holidays there with the boys. Joan participated in many sports – skidooing, basketball, bowling, curling, skiing, golf, and pitching fastball for the Acadia Cougars Fastball team. Joan and Bryan got involved in horse racing with good friends, Walter and Lynn. Highlites of the years were traveling to Louisville and Lexington, Kentucky for horse sales. Joan’s favorite horse, “Yankee Freestyle,” became an Albertan Champion. Joan retired from the E.R.C.B. in 2009 after 15 years. And although she had health issues for the past 15 years, like the trooper she was, never complained. We would like to thank the many doctors, nurses, and girls at Southwood Care Home for their compassion. If friends so desire, memorial tributes may be made to the Heart and Stroke Foundation. A Celebration and Luncheon will be held at Pierson’s Forest Lawn Chapel, 4121 17 Avenue SE, Calgary, on Saturday, August 20, 2016 at 12:00pm.