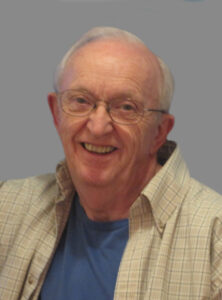 Bill Ross passed away on Saturday, May 9, 2015 surrounded by his family at the age of 79 years.

He will be lovingly remembered by his daughters Jennifer Ross (Pepsi Fortin) and Stephanie Dobson (Joe); granddaughters Abbey, Nicole, and Kate; grandson Gary William; sister Peggy Young, of Peers, AB; brother Jack Ross (Alice) of Kamloops, BC; and many more family and friends. Bill was predeceased by his wife Cathrine (April 10, 2013), and a brother Ron Ross.

Bill was born and raised in Olds, AB, the youngest of four children. At a very young age he met Cathrine who became the love of his life and best friend. After graduating from High School in Olds, he attended the University of Alberta and then joined Revenue Canada where he worked until his retirement. In 1966, Bill married Cathy and they moved to Calgary which has been their home ever since. Together they lived lives of service. Their home church, Knox Presbyterian was their refuge and second family, and Bill served on every committee possible. For many years he volunteered and advocated for the Calgary West Seniors Housing Society. Bill loved to garden, was a patron of the arts and enjoyed traveling. We will miss his “hang loose” way, his sense of humour, and his kindness. Bill was a devoted husband, father and grandfather and was never happier than when he was surrounded by his family. A Memorial Service will be held at Knox Presbyterian Church (3704 – 37 Street SW, Calgary) on Friday, May 15, 2015 at 11:00 am.