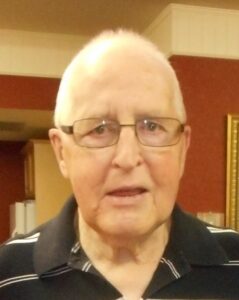 Bill was born in Vancouver, BC and attended Carleton Elementary School and John Oliver High School where he met his future wife, Jean. He worked in the family auto wrecking business until 1957 when he moved into the metal business. In 1972, the family moved to Calgary where Bill worked for Atco Metals as the Production Manager.

In 1980, Bill and Jean founded Grant Metal Products Ltd. and created a successful business which is still operated by two generations today.

Bill spent his retirement restoring his 1940 Cadillac LeSalle. He was an active member of the Alberta Pioneer Auto Club and enjoy going to the Show ‘N Shines. Bill sold his car at the Okotoks Classic Car auction in 2014.

Bill was known by friends, family and business colleagues as a kind, friendly, honest man who would help anyone. Integrity was his middle name.

In lieu of flowers, donations may be made to the Alzheimer Society of Alberta & Northwest Territories.