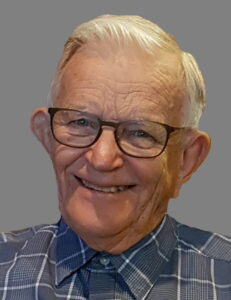 William Bell Anderson, a beloved husband, father and grandfather, died peacefully with family at his side at Agape Hospice in Calgary on March 18 at age 92.

Bill was born in Calgary and raised in Moose Jaw and Regina, Saskatchewan. He graduated from the University of Saskatchewan with a degree in Mechanical Engineering. Bill worked in the Oil and Gas sector for over 60 years where he continued to share his knowledge right up until his passing. His career led him to live and work throughout the Prairies, where he met Leila in Virden, Manitoba. Bill and Leila married in 1957 and together they shared Bill’s various career moves while raising three children, finally settling in Calgary in 1966. They came to love exploring the Rockies where they spent much time hiking and camping.

Bill won a Flying Scholarship as an Air Cadet and learned to fly in a DH Tiger Moth. This led to a lifelong passion for aviation. He was also a keen musician and played in brass bands from a young age starting with the Regina Lions Club Band in the 1940’s and continuing with concert bands in Calgary right up until 2020. At an adjudication early on in his musical journey he was identified as “clearly a crowd favourite.” Bill was also an artist and loved to paint, enjoying his art classes for many years.

Crediting success in his many adventures to “good looks and clean living,” he was always generous with his time and humour. Bill loved to share his interest in learning with his friends and family, and in later years the Danish Canadian Club was a frequent venue for his get-togethers.

He is survived by his wife Leila, his three children Bruce (Anna), Glenn, and Janet (Greg) and grandchildren Brenna, Aydan, Megan, Cody, Ginny and Sam.

Bill was a much loved fixture at family gatherings and will be deeply missed.

A memorial will be held at a later date to better allow family and friends to gather.

If desired donations can be made to Ecojustice or to Calgary Women’s Emergency Shelter.