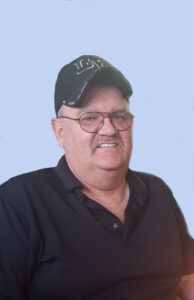 With great sadness we announce the passing of Wayne Nesbitt Condie, on Sunday, June 5, 2016 at the age of 59 years. His sudden death was unexpected and our hearts are broken. Wayne was born in Kincaid, SK on May 13, 1957. After completing his elementary school and high school in Kincaid, he moved to Regina to work for SaskTel. While in Regina, he met his future wife Debra. They were married September 24, 1977. He was passionate about farming and in 1978 they moved back to Kincaid to farm and formed Pinto Creek Enterprises a fertilizer business. They sold their farm Condie Farms Ltd.in 1996, and moved to Lethbridge where Wayne began a new career of long haul trucking. At first he hauled goods for various companies throughout Canada and the USA. Then Wayne and Debra struck out on their own, with Conalta Enterprises Corporation and continued to haul goods throughout Canada and the USA. Wayne enjoyed his life and frequently connected with loved ones. He was always sending text messages to find out what everyone was up to. He had a love of talking about current hot topics and especially politics at all levels. The Trump nomination was a frequent source of conversation. He was a competitive athlete and enjoyed trying new things. Just a few years ago he took some tennis lessons with his daughter Karen and loved the challenge of sharpening his skills. He always loved playing pool and frequented the clubhouse in Mesa to challenge anyone to a game. He had a fierce competition playing pool with his son Drew but over the years Wayne realized that his son had surpassed him with his skill. Instead of having his ego deflated, Wayne was very proud of Drew’s skill. He was also very keen on knowing the latest trends and reading scientific magazines. He would always be passing on articles to read with new things to try. He was always trying to help out others around him by offering advice. Wayne is survived by his beloved wife of 38 years, Debra Mae Condie (nee Walter). Wayne leaves to cherish his memory his four children; Drew Condie of Edmonton, AB, Karen (Bart) Boersma of Calgary, AB, Shannon (Kelvin Wan) of Niagara Falls, ON, and Amber of Calgary, AB; his 5 grandchildren, Jackson, Oscar and Zaphia Condie, Camilla and Kai Condie-Wan; his father Ivan Condie of Mankota, SK; one sister Carol (Bob) Peters of Eatonia, SK; one brother Loren (Sharon) Condie of Kincaid, SK; nieces and nephews, Christopher (Britanny) Peters and son Connor, Michael, Wyatt, Matthew and Sierra Condie. He also leaves his father-in-law and mother-in-law Cliff and Maureen Walter of Regina, SK, and brother-in-law Doug (Cindy) Walter and daughters Brianna and Jenna of Regina, SK. Wayne was predeceased by his mother Vivian. A Memorial Service will be held for Wayne at Pierson’s Forest Lawn Chapel (4121 – 17 Avenue SE, Calgary) on Friday, June 17, 2016 at 2:00pm. Messages of condolence and/or flowers may be forwarded to the family at www.piersons.ca. If friends so desire, memorial tributes may be made in memory of Wayne to the Heart & Stroke Foundation (www.heartandstroke.ca) or a charity of your choice.