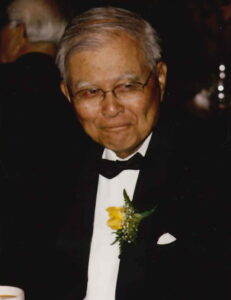 Wallace was born on October 7, 1924 in Shanghai, China to his mother May Wong and his father Shun Lee, owner of Sun Sun Department Store. While in China, Wallace served in the Chinese Army where he attained the rank of First Lieutenant. He retired from the army in 1945. Wallace then taught music and Chinese literature. On February 12, 1953 he married Phyllis Ping Ning. Together they emigrated to Canada in 1954 and settled in Calgary. Wallace was first employed at Food Vale then his career took him to Scott National as a salesman. In 1960 Phyllis and Wallace purchased a new home. There they started their family with Baxter Bon Lee being born on April 5, 1961. Wallace retired from Scott National in 1989. Phyllis and Wallace loved cruising and attained Platinum Status with Princess Cruise Lines after 23 cruises. Wallace enjoyed singing, reading, music, dancing, holidaying especially in Maui, gardening, and spending time with family and friends. He was a big fan of the Calgary Stampeders, and the Calgary Flames. Wallace enjoyed a long happy retirement with Phyllis by his side.

He is survived by his loving family, his wife Ping, son Baxter, daughter-in-law Gillian, sister Irene and numerous other relatives and friends.

Due to COVID, there will be no formal service. A private family graveside will take place at Mountain View Memorial Gardens.

If relatives and friends so desire, memorial tributes may be made to the Kidney Foundation of Canada, www.kidney.ca