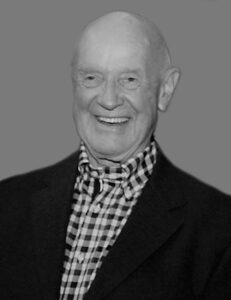 On June 29, 2020 Bill Siebens at the age of 86, passed away peacefully in his Calgary home after a life well lived. He is lovingly remembered by his wife Sharon, his son Carter (Ellie) and their children Renner, Dane and Taryn; his daughter Rhondda (Troy) and their children Kjell, Leif and Maja; and, his daughter Evann (Keith) and their children Nelson and Gwynneth. Bill will be deeply missed by his sisters Nancy Siebens Binz and Mary Jane Siebens and by his brother Stewart Siebens (Dianne) and his brother-in law Rick Gutrath (Charlotte). He leaves behind many nieces and nephews, as well as his former wife Clarice Evans, the mother of his children.

For anyone that knew Bill, he was a man of few words. With his pragmatic outlook on life, Bill was frank, direct, and wise. Many people reached out for his counsel and guidance. Bill was a widely respected businessman; a generous and compassionate community philanthropist; and, a wonderful husband, father, and grandfather. While his business achievements were many, his greatest pride and joy were his children and grandchildren.

Bill attended the University of Oklahoma and graduated with a degree in Petroleum Engineering. Afterward he became a jet fighter pilot stationed in Libya, flying F-86s. He was considered a â€œluckyâ€ pilot having had a few close calls, including a crash landing at night in a T-33 jet trainer after a flameout and complete failure of the electrical system.

Over the years, Bill was recognized for his achievements, successes, and generosity in many ways. Notable among them was his appointment as an Officer of the Order of Canada and his induction into the Canadian Petroleum Hall of Fame. He served as a Corporate Director on many boards including Petro-Canada and the Fraser Institute.

It is difficult to outline the entirety of Billâ€™s business achievements. Itâ€™s a story of hard work, determination, vision and entrepreneurial spirit. The two companies he was instrumental in founding and leading were Siebens Oil and Gas (SOG) and Siebens Oil and Gas (UK). SOG went public in 1970 and became the largest exploration land holder in Canada. SOG also held acreage and explored in the Seychelles Islands, Socotra Island off the Yemen coast, Vietnam, and the North Sea. The company was sold to Dome Petroleum in 1979. Siebens Oil and Gas (UK) was a separate public company and was directly involved in the discovery of the Brae Field.

Billâ€™s love of travel began at an early age and was greatly influenced by his mother Velma Wolf. When Bill was a teenager, he spent a year in Germany as a foreign exchange student. He also spent a memorable summer travelling the Alaska highway with his family, hunting and fishing along the way. They were the first civilians to travel the ALCAN highway (as it was then known) after World War II.

This love of travel and adventure, with family and friends, continued throughout Billâ€™s life and took him to destinations around the world. He became especially fond of London, England during his international oil and gas exploration days, eventually acquiring a second residence in London which he used to host family and friends for many years. In his later years Punta Mita, Mexico became Bill and Sharonâ€™s winter home base where they would host many local and international friends and family.

Bill was an avid sportsman having played football, water polo and competitive swimming in his youth. Recreationally he enjoyed golf and tennis. He was a lifelong fisherman and hunter. He was instrumental in arranging family pheasant hunts at Griffith Island Club in Georgian Bay that started in the 1970s and which is still an annual event. In its early days, Billâ€™s sister Gloria and her husband Jack, along with sister Nancy and brother Stewart and his dad, Harold, would all attend. He also attended various hunts in the UK and Spain with friends and family for many years.

Not only did Bill admire and appreciate the importance of the Calgary Stampede, there were few people who enjoyed it more than he did. His infamous hat and his legendary stamina during the 10 days would be remembered by many friends. He also stayed connected to friends through his annual Christmas Pheasant Luncheon, which he hosted for 37 years, the Thursday Guys Lunches and his Code Red meetings.

One of Billâ€™s favorite experiences was his presidency of the Calgary Petroleum Club during the 1988 Winter Olympics. Bill ensured that the Club warmly welcomed the international community and he worked tirelessly with the local organizing committee to help create a legacy of the 1988 Winter Olympics. The donation Bill and his father Harold made enabled the Olympic Hall of Fame in Calgary to be built.

Philanthropy was always an important part of Billâ€™s life. Over the years he helped many people in many ways. One example is Bill and Sharonâ€™s long-time support of the United Way of Calgary, which has positively impacted thousands of Calgarianâ€™s lives. Their generosity earned them the first Canadian seat at the United Way Roundtable, representing a group of international philanthropists who are leading donors to the United Way.

For most of his life, Bill was a healthy and strong individual who lived life to the fullest. Sadly, over the past few years, Billâ€™s health began to deteriorate whereby chronic pain was his constant companion but he rarely complained.
Our community, our province, and our country are a better place because of Bill Siebens, and he will be greatly missed.

Bill was fortunate to have tremendous support from Dr. Doug Caine and the Helios team over the years. The family would also like to thank, and acknowledge, Dr. Jean Peloquin and Canadaâ€™s evolving MAID legislation. Billâ€™s journey ended the way he lived his life – with dignity and no regrets.

A private family service will be held according to Billâ€™s wishes. In lieu of flowers donations can be made to the United Way of Calgary (calgaryunitedway.org/covid-response-fund).