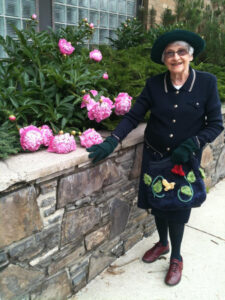 Virginia Louise “Ginny” Myers (nee: Nelson) passed away on April 1, 2016 at the Sarcee Hospice in Calgary, AB at the age of 100. She was a loving mother, grandmother, great-grandmother, sister, schoolteacher and life-long member of The Church of Jesus Christ of Latter-Day Saints. Virginia is survived by her seven children, thirteen grandchildren, nineteen great-grandchildren, and five siblings. Virginia was born on May 26, 1915 at Mt. Pleasant, Utah to a sheep-farmer and housewife. She was the second of nine children. In the middle of the Depression, Virginia graduated from North Sanpete High School in 1933. Two years at Snow College was her only affordable option after high school. In the fall of 1936 she attended Utah State where she was chosen as the Sweetheart of Sigma Chi by the fraternity brothers. In 1938 she graduated with a Bachelor of Science degree in Home Economics. Virginia accepted her first teaching job at Virgin Valley High School in Bunkerville, Nevada. It was one of her 13 students who introduced her to a handsome petroleum engineer, William Howard Myers. He won her heart when he presented her with an apple for the teacher. They married on her 26th birthday, May 26, 1941. Howard was employed by the United States Geological Survey to search out strategic minerals and oil. In the first six years of their marriage they moved eight times through California, Wyoming, and Texas. Their growing family also lived in Puerto Rico and Alaska. The family settled in Calgary in 1951. Virginia began teaching again in 1964 and retired in 1980. Retirement allowed her to travel, golf, and swim well into her 90’s. She traveled around the world at least twice, and in 1993 spent a year on a mission at the LDS genealogy library in Salt Lake City. Her sweet, generous, and uplifting spirit will be missed. In lieu of flowers she is requesting that donations be made to the MS Society of Canada – Calgary Chapter www.mssociety.ca.