You are here: Obituaries / Victoria Funk 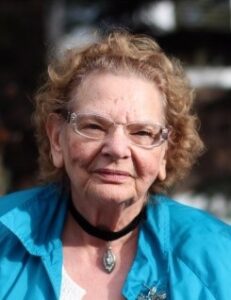 Victoria Funk passed away on Tuesday, September 29th, 2020 at the age of 88 years. She will lovingly be remembered by her son, Richard Edward Funk; the sole remaining member of the family. She was Baba to Julia (Rosler) and Sarah (Sean Carter), Aubrey (Mike Sturko), Zack (Chelsey Johnson), Stacy (Tanner Stewart) and Dallin (McKinley Mathes) Funk. She loved welcoming her great-grandchildren Austin Rosler, Gavin and Lukas Desjarlais, Joy and Katie-Lynn Watson, Adara, Ilyssa, Kaylee and Alden Schmidt, Steven Riddle, Bronson Funk and Seraphina and Genevieve Stewart. Victoria will also be missed by her older sister, Helen Oczkus Krokosh (John). She was predeceased by her husband, Edward Wiebe Funk who passed away April 12, 2020 and her daughter Esther (Funk) Hendricks who succumbed to cancer just seven weeks ago. She was also predeceased by her parents, Joseph Oczkus and Maria (Wegrzynowicz) Oczkus, her brother Edgar Oczkus (Verna) and sister Adeline Oczkus Chaput (Ed).

Victoria was born in St. Boniface, Manitoba and was raised in Lorrette, MB on a farm. She knew how to work! She met Ed when he and his brothers had a band and played at local dances. Edâ€™s sister, Tina, needed a companion so Vicky was asked to accompany them. She always said â€œI will marry one of those Funksâ€. Ed & Vickyâ€™s relationship evolved and they were married November 28, 1950 – they would have celebrated 70 years together this year. She was Edâ€™s sweetheart, he brought her flowers weekly and she loved them.

Shortly after marriage, Esther was born but tragically contracted polio. They moved to Calgary to have access to the best doctors and this is where Richard was born to complete the family. Victoria worked as a waitress for many years to supplement the family income. They lived close to the Childrenâ€™s Hospital where Esther often stayed due to her polio and the operations that were necessary. Victoria constantly encouraged and prodded Esther to be as mobile as possible and for many years Esther was able to walk with only crutches and braces.

Vicky had many friends and their friendships spanned many years. She was an avid letter writer and made a conscious effort to keep in touch with those she loved. She always had a card/gift for each special occasion and some money tucked in for a treat. All were made welcome and loved.

Ed & Vicky loved to travel and often planned their trips with visiting family and friends in mind. Many trips were made back to Manitoba to visit family and maintain family relationships.

Victoria had a kind and loving heart and an exuberant welcome for all who came to her door. She loved visitors and could put a dinner on the table in no time flat. No one left hungry.

Many of the grandkidsâ€™ best memories are being out on the farm in Dewinton, picking and eating all the raspberries they could, playing in their private playground, enjoying the toy treasures, picking up mail at the post office and having juice and cookies from her never ending cookie stash.

She always had to have a garden and shared the bounty of it with family and friends. She was always aware of others, was often found helping those in need and would share their extra garden bounty with those who could not grow for themselves. She taught her children and grandchildren to pick potatoes, harvest vegetables, shell peas and snap beans.

Victoria was also a strong supporter of extended family and would make time to attend special events in her children and grandchildrenâ€™s lives. She decorated her home with pictures everywhere! She always wanted to be surrounded by those she loved.

Donâ€™t get me wrong – she also had strong opinions and voiced them often. We loved her anyway.

We are comforted by the knowledge of a grand reunion of these three loved ones, Victoria, Ed and Esther who could not be separated by death. We will miss you.

At Victoriaâ€™s request, no formal funeral services will be held.