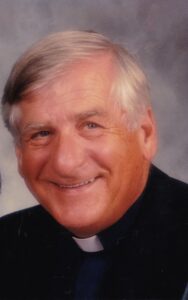 On April 18, 2019, Victor William Frederick Cabel, 81, of Calgary, Alberta died peacefully with his loving wife of 48 years, Suzanne (Beckloff) at his side. Vic passed away after a short stay at Brentwood Care Centre.

Vic was born April 25, 1937 in Calgary, Alberta, to parents William and Alvina, immigrants from Poland. He had a younger brother, Gordon who also married a Suzanne. As a boy Vic lived in several rural locations around southern Alberta, his favourite being his adopted hometown of Didsbury. After establishing Cabels Dairy in Sundre, his father passed away when Vic was 12, leaving him to be raised by his mother.

After high school, Vic initially worked as a bank employee, and posted to Sexsmith where he felt a call to ministry. He completed his theological education at the College of Emmanuel and St. Chad in Saskatoon. He was ordained Deacon in 1966 and priest in the Anglican Church of Canada in 1967. He served in parishes in Onoway and St. Timothys in Edmonton before settling at his longest-serving positions, as rector at St. Thomas Sherwood Park, followed by St. Cyprians Calgary. It was in Edmonton where Vic met Suzanne, and they married on December 28, 1970. Vic retired in 1994, but remained active in ministry, serving as a monthly celebrant in Sundre, and finally, at St. Laurence in Calgary. Vic was thankful for the opportunity to provide pastoral care with many at St. Laurence whom he came to consider friends.

Travel was Vics passion – planning and enjoying trips and creating fond memories. Food was also important; cooking, entertaining, and dining out. His signature dish was Tiramisu, perfected at a culinary school in Bologna, Italy. He also enjoyed his membership at Calgary Centennial Rotary for many years.

He is survived by his wife Suzanne, his two sons Patrick and Christopher and his wife Devin, and his twin grandsons Owen and Nicklaus.

In lieu of flowers, donations to the Primates World Relief and Development Fund would be appreciated (www.pwrdf.org).