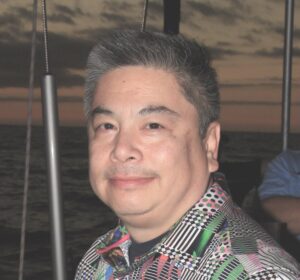 Tim Lee passed suddenly at home on September 4, 2019 at the age of 53 years with his wife of 30 years Sara and beloved puppy Dante by his side. A kind, funny, thoughtful, and generous soul, Tim will be greatly missed by his wife Sara, sister Selina (Svend), father Richard (Mindy), mother-in-law Marg and father-in-law Murray, sister-in-law Janet, brother-in-law Greg, and best friend Bill. Sara and Tim have traveled to Mexico for each of the past 15 years, where he was also loved by his extended Mexican family. Tim grew up in Barrie, Ontario with his younger siblings Ed and Selina, and parents Richard and Marina. He met the love of his life Sara at Western University in London, Ontario. They started their life together in the Toronto area and were married in 1990. In 1996 they moved to Calgary and eventually made their way to Okotoks, where they have resided since. Tim excelled in landscape photography, classical piano, and had a special knack for computers and technology. In addition to being a computer whisperer, he was a dog whisperer and a true animal lover. Among the many dogs he has loved over the years, there has been BB, Kailey, Sebastian, Xander, and the newest addition to the family, Dante; as well as Selina’s dogs Orlando and Endeavour. He was passionate about models of WWII battleships, rockets, planes and trains, music, books, and movies including science fiction, fantasy and horror. He was also a keen sports enthusiast – he was a faithful and unwavering supporter of his favourite teams, among them the Boston Red Sox, New England Patriots, Detroit Red Wings, and Seattle Seahawks. A Memorial Service will be held for Tim at Pierson’s Forest Lawn Chapel (4121 – 17 Avenue SE, Calgary) on Tuesday, September 10, 2019 at 2:00 pm.