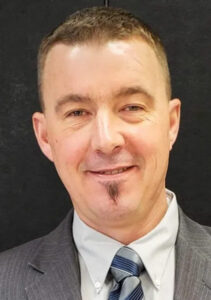 It is with much love and sadness that the family of Timothy Michael Goodrow announce Tim’s sudden passing with his stepsister Lisa Wuohela (nee Rae) on October 6, 2021. He will be dearly missed by his parents Mike and Susan Goodrow (stepmother); mother MaryEllen McManamy; sister Jacqueline Goodrow (Dave Hand); step brother Brandon Rae; and his many aunts, uncles, cousins, nieces and nephews. Tim was predeceased by is grandparents George and Norma Goodrow (nee Conway) and Austin and Jean McManamy (nee Husted).

Tim was born on August 22, 1975 in Etobicoke Ontario and moved to Calgary from Milton, Ontario in 1988. He moved back to Lindsay Ontario where he graduated from Lindsay Collegiate in 1995 and maintained many of those friendships to this day. Tim enjoyed following the Maple Leafs, his cousin’s journey to the NHL, playing and recently teaching his nephew how to play the drums. Over the years Tim worked with several companies, but was most proud of his time spent working at Russel Metals in Calgary.

A private family service has already been held, followed by cremation.