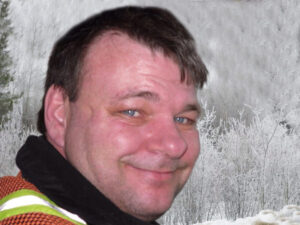 It is with great sadness that the family announces the sudden passing of Terry at home on Saturday, March 8, 2014 at the age of 50 years. Terry will be lovingly remembered by his two children Kara-Anne Wilhelm (Rick), and Emily Eddy; ex-wife Holly Eddy; girlfriend Marion Adam; sisters Lynn Fyhn and Sharon Adams; brothers John, Greg, Bruce, Robert and Jay and numerous other family members and dear friends. Terry was predeceased by his brother Roy Eddy, uncle Jimmy Cowan and grandmother Pearl Cowan. Born in Creston B.C., Terry spent many years working seismic prior to joining the team with URS Flint. Terry had many hobbies and joys. One of his greatest pleasures was reading, especially anything by J.R.R. Tolkien. The Hobbit being a special favorite. Animals were another love for Terry and he could be found on many occasions walking dogs at the Lloydminster SPCA and just simply being outdoors, enjoying nature and stargazing. Along with his love for the outdoors, Terry had a true green thumb and adored working in his garden growing flowers and vegetables. Karaoke and music was a favorite past time and making up his own words to songs was a real pleasure as well as learning to play the fiddle and violin. Being a huge sports fan, Terry enjoyed watching his teams the Toronto Blue Jays and the Calgary Flames. Terry loved laughing, having fun and was a sincere and caring man with an amazing sense of humor. Family was especially important to him and he will be greatly and sorely missed by all those that he surrounded himself with.

“Yet Feet That Wandering Have Gone Turn At Last To Home Afar” – J.R.R. Tolkien

A Celebration for Terry’s Life took place Saturday March 15, 2014 at Pierson’s Forest Lawn Chapel, 4121 17 Avenue S.E. Messages of condolence may be forwarded to the family at www.piersons.ca. Arrangements are in care of PIERSON’S FUNERAL SERVICE. Telephone 403 235-3602.