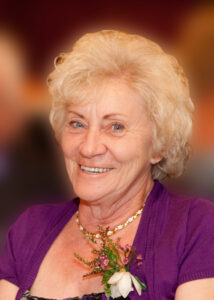 Susie Beatrice Kroeker, affectionately known as Bea, peacefully went home to be with her Saviour and Lord, Jesus Christ, on July 19, 2016. She was born on March 19, 1947 in Altona, Manitoba, the youngest of five children and grew up in Roseisle, Manitoba. After she met and married Barney Kroeker in 1967, the couple first lived near Strathmore, Alberta and then settled in Calgary. Barney and Bea deeply loved each other and rarely spent a day apart before the Lord called Barney home in 2013. Bea loved and prayed for her four children faithfully and provided a Christ-like home for them, filled with laughter and fun. She enjoyed her grandchildren immensely, playing games with them and cheering them on in their various interests. In retirement, Bea and Barney worked side by side for 17 years with Roving Volunteers in Christ’s Service (RVICS). Following his passing, Bea continued serving others at Heritage Christian Academy and the Humanitarian Aid Response Teams. Her primary love was for her Lord and she was a great example of love, faith, gentleness and commitment.

Bea will be lovingly remembered by her four children and their spouses: Petula and Brian Foley, Steven and Susan Kroeker, Duncan and Marcie Kroeker, and Dione and Steve Funk; grandchildren: Joshua, Caleb, Luke and Megan Kroeker; Keeley and Noah Kroeker; Unity, Ridge, Jordon, and Hayden Funk; step grandchildren Christine Burton; Laura and Christopher Lloyd, Amy, and James Foley; and step great-grandchildren Elise Sinclair and Grayson Burton. She will be sorely missed by her large extended family and group of friends. Bea was predeceased by her parents, Wilhelm and Marie Dyck and her granddaughter Hope. Bea’s life will be celebrated on Saturday, July 23, 2016 at 11:00 am at First Alliance Church at 12345 40 Street S.E., Calgary. In lieu of flowers, the family requests that donations be made to Samaritan’s Purse Canada at samaritanspurse.ca.