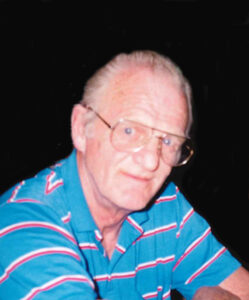 It is with heavy hearts the family announces that Stu passed away on Friday, September 18, 2015 at the age of 80 years. Stu was born in Belfast, Ireland but spent the majority of his time in Calgary. He was predeceased by his Father Victor HENRY, Mother Molly (GREER), Stepmother Elizabeth (BAIRD)and his wife Ellen Diana (BOYD). He leaves behind his son Victor and daughter Kathleen, step-children, Murray (Jane) Norrington, David Norrington, Cindy Norrington and Greg Henry. Eight grandchildren and twelve great-grandchildren. Too many friends to name, but a special thanks to the three known as the wise men, Mike, Lawrence and Kim, all the staff at the Peter Lougheed and Dr. Danica Brister who provided exceptional care throughout his illness. Stu was a kind, gentle and generous man who was loved by everyone who knew him. Stu’s step-children would like to invite his friends and family to join them to share stories and memories at the Penbrook Community Hall (6100 – 8th Avenue SE) on September 26, 2015 at 1:00 pm.