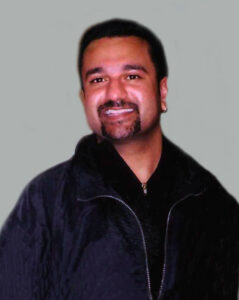 It is with heavy hearts that the family of Steven Rajesh Wilson announce his passing on Sunday, May 1, 2016 at the age of 42 years. He leaves behind his daughter, Janice Wilson; his mother, Kiran Wilson; his brothers, Victor Wilson and Ronald Wilson; and his sister, Roselyn Dhaliwal; not to mention brothers and sisters-in-law, numerous nieces and nephews, aunts and uncles around the world and the people of Fiji. He was predeceased by his father, Victor Wilson. Steven was a kind, loving soul who touched the lives of all who knew him and will be greatly missed. A Funeral Service will be held for Steven at Pierson’s Garden of Peace Chapel (16 Avenue & Garden Road / 100 Street NE, Calgary) on Wednesday, May 4, 2016 at 1:00 pm. Messages of condolence may be forwarded to the family at www.piersons.ca.