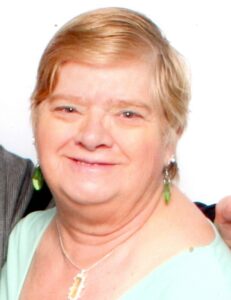 Solveig was born in Denmark, just outside Copenhagen and immigrated with her parents to Canada when she was 7, first to Montreal, then Saskatchewan before settling in Calgary.

Solveig was one of 5 children born to Ludvig and Ruth Jensen.

Solveig lived a colorful life. She left home early and her first job was with the carnival at the Calgary Stampede. The opportunity to travel with the company made her stay with it and travelled throughout Canada and the United States.

Unfortunately, Solveig suffered a stroke at the age of 18 in Florida and subsequently she returned to Calgary. Left with some disability, she never let that stop her from trying something new.

She had many hobbies including knitting, crochet and painting. Solveig loved cooking and she was a fantastic chef. She helped people by volunteering at several organizations.

In 1999, she met her soul mate, Guy Carriere in Calgary and they have been together ever since.

She is survived by Guy; her children, grandchildren and a great-grandchild; a sister Kim Wold of Calgary, and a brother; John Jensen of Copenhagen, sisters-in-law Simone Cockerill, Noella Porath, Theresa (Bert) Holtby, Stella Carriere and brother-in-law Charles (Gloria) Carriere. She is also survived by many nieces and nephews.

Solveig will be missed by so many friends and her generosity and kindness will be an everlasting memory.

A Memorial Service will be held also at Pierson’s Funeral Service the following day on Wednesday May 5, 2021 at 2:00 pm.