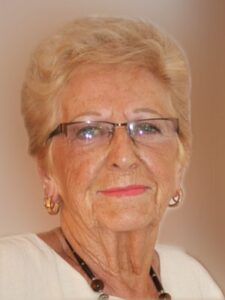 Mom has died.  Shirley Odney took her last breath two months to the day after her 92nd birthday having struggled for over a year with health challenges. Shirley leaves behind three kids, who are attached to each other by the elastic string of time – Jody, Blair and Pam. There’s a story behind each of Shirley’s kids, but that’s not the point of this obituary.

Shirley also leaves behind six amazing grandchildren – Jeremy, Travis, Kate, Tom, Jordan and Luke.  And they’re attached to the most amazing people.  Denise and Jeremy have Noah, Angel-Lena and Skylar.  Andrea and Travis have Sadie, Kaelyn and Asher.  Kate has Josh, Zachary, Sam and Harper.  And there are Tom and Marlaina, Jordan and Colleen, Luke and Meghan.  Shirley’s first and most significant other (besides Steve), is Uncle Tom; she cherished Uncle Tom.  When Auntie Lil arrived, and they had Sam and Ben, Shirley became Auntie to her immediate family and oh how she loved them.  As best she could. And then there were other siblings from her parents’ second marriages.  Jason and Charlie and Crystal.  And their partners Carole, Charlotte and Duane.  And they all had kids too. And then there were Steve’s side of the family…sister Annabelle, and brothers Oscar and Carl….and all their kids too. Oscar is still with us.  Crazy as it sounds, we are also all connected by the elastic string of time.  We share all of this first because we are the ones left to tell the story.  We are the ones to whom this legacy is bestowed.

Shirley was born in the farmhouse of her grandparents, the beautiful daughter of George and Lois. In our day, we would have made a completely different decision than the one George and Lois made.  Crazy as it sounds, they tried to make it all work. When Tom came along 12 years later, Shirley was no longer alone, and they were family.  Until it didn’t work.  At 15, Shirley found herself on her own, digging heating coal out of the frozen snow, while trying to finish high school.  After serving in retail in Camrose and Calgary, Shirley met Steve on a blind date on December 12. No one ever thought she’d find the right guy. Steve was scandalized that Shirley was not wearing stockings that night, until she informed him they were seamless.  Sheesh.  They all thought she was pregnant when they got married on March 20 four months later. But it wasn’t so.  They just loved each other. We can thank Steve’s mom Thelma for making sure the nuptials happened.  And then three kids showed up, in rapid succession.

This marriage, this relationship, this amazing life took Steve and Shirley from their safety zone of Southern Alberta, (Calgary really), to Edmonton, Moncton NB, Vancouver, until they finally landed back in their beloved home of the white Stetson.  Through it all, our Mom was the mother of three kids – three kids under 5.  Three pre-teens.  Three teenagers.  You can imagine….everything in threes.  She also volunteered.  First with youth at Hi Y in Moncton, connected to the YMCA, then with the church on the west coast, then the cafeteria at Queen Elizabeth High School in Calgary.

When Shirley became a realtor, all things changed.  She met some of her dearest friends on the job. Given her humble beginnings, Shirley was super proud of the moment she was promoted to manager within the firm of Royal LePage.  But then she became a grandma – oh did she become a grandma.  We’ve already named them all, but each had a special place.  Jeremy was first. ADORED. Travis came second. A brother for Jeremy.  ADORED.  Kate came next and she was the only girl. ADORED.  Then Tom came, with Uncle Tom’s name.  ADORED.  Finally, Blair had kids. They were Odneys.  ADORED.   When Shirley injured her back, sliding down a playround slide with one of her grandkids, life changed again.  Ask us how.

Shirley and Steve discovered the desert in Yuma and they discovered they could simply live without an agenda or someone’s mouth to feed.  They loved the desert.  The met many good friends in the desert.  On their 50th wedding anniversary cruise, they discovered Mazatlan in Mexico. And somehow, Mazatlan became the symbol of their greatest contribution. They taught English to little Mexican kids and they helped a family (Chema and Oralia, Xochitl and Tanya) to find a future. Ask, we’ll tell you the story.

All along, Shirley was blessed with the gift of creativity.  She studied piano as a young girl and at least one of her kids has a memory of sitting next to her while she ripped out her version of Let it snow, Let it snow, Let it snow. She and dad went dancing now and then on a Saturday evening (she dressed just like Jackie Kennedy) On Sunday morning, she was ready to sing in the choir.

Shirley sewed her own clothes.  In the first purge of her steamer trunk, Shirley had tucked away one of the outfits she had made in each of the decades she sewed.  It was amazing.  There are photos of her in her own clothes.  Then she rediscovered knitting – and if you didn’t have a Cowichan sweater you hadn’t met her yet.  Then crochet.  Each of us has an afghan crafted from her hands.  If you don’t have one, some of us have two; just ask.  And then something reminiscent of her childhood drove her into the mystical world of miniatures.  Her first doll house was an impressive white and yellow Victorian mansion.  After she built the house kit, she painted and decorated every detail.  And that was the start.  Gardens.  Hat Shops.  Christmas Rooms.  A lady’s boudoir.  She was a prize winner at the Calgary Stampede and she travelled all over North American.  She loved it and the friends that gathered around it all.

After Pam hosted the second family reunion celebrating some birthdays, Steve died.  That blew a hole in Shirley’s heart.  No one loved Grandma Shirley like our Dad.  From that moment to the moment she took her last breath, Shirley learned acceptance.  At least that’s what she said.  We are forever grateful to the wonderful and caring staff of Unit 72 at the Rockyview Hospital, and Unit 6 of Clifton Manor. Their work was not easy.

And now its time to celebrate Shirley’s life.  On Saturday, September 18, 2021 at 2:00 pm, we will gather at Knox United Church, 506 – 4 Street SW, Calgary, (COVID restrictions by AHS will be adhered to), to pay tribute to a woman who has made a permanent mark on our lives.  Like a sharpie.  Join the family and be part of the music and the story telling.  We’d love to have as many of you who can come as possible.   There will be coffee and sandwiches after the service for us all to have a great ol’ family chinwag.

People have asked us about making a memorial contribution somewhere.  Mom died the day before the bodies of 215 children were discovered in unmarked graves at the residential school in Kamloops. Mom and Dad would have been heartbroken So, we encourage you to contribute to one of two places.  Indian Residential School Survivors Society https://www.irsss.ca/  Or Reconciliation Canada https://reconciliationcanada.ca/ 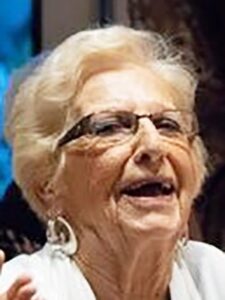 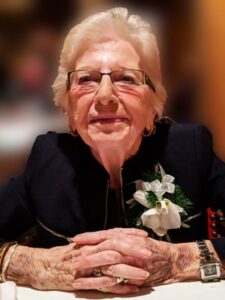