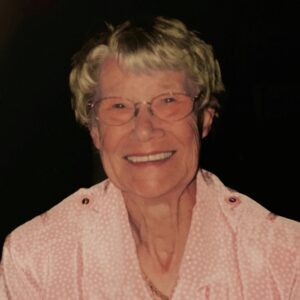 It is with great sadness we announce the peaceful passing of Ruth at the age of 92. Ruth was born and raised in Stein am Rhine, Switzerland. While working in the Jersey Islands, Ruth met her future husband Andy and the two decided to immigrate to Canada together. Arriving in Halifax in 1951, they continued directly on to Ontario where they were married shortly thereafter. Their first two children, Audrey & Heidy, were born in Ontario. A few years later they headed west to Calgary where Jill (Susy) was born. After a short time in the “city” they decided to become farmers and purchased a farm in Delacour. Here they had their fourth child Kent and remained farming until retirement. In 2001 they surprisingly moved off the farm to Chestermere. Here they greatly enjoyed the Whitecapper Community and many great neighbours and friends.

After the birth of her grandchildren, Ruth became a Grossi (Grandmother). “Grossi” became her name and embodied her identity as a strong, active and altruistic grandmother to all those that knew her and loved her.