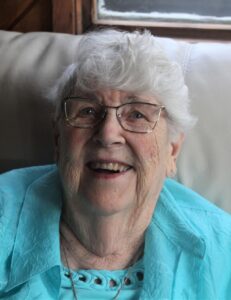 Ruby passed away peacefully in Calgary, Alberta on July 24, surrounded by family. Ruby leaves to mourn her daughter, Janie Orchard and husband Donald; three grandchildren, Eric, Arlene, and Onalee (Steve Arnott); and two great grandchildren, Oscar (9) and Archie (7), who have been her biggest sources of joy the past decade. She also leaves 9 special nieces and nephews who kept in touch regularly via Facetime, email and phone. She was predeceased by her husband Jim, her parents Duncan and Jennie Hamilton, her sister Elva Scharf, and her brother Cliff Hamilton.

Ruby was born in Manitou, Manitoba, on October 6, 1925, and grew up as the youngest child in a family who loved to entertain through music. Her father, Duncan and her brother Cliff enjoyed picking up various instruments and entertaining. Duncan taught Ruby how to play the piano at a young age, having her chord to his violin. She noted he would teach a little, she would play a little, then he would â€œgive upâ€, and she would sit alone at the piano and â€œfigure it outâ€. Then the next time they would play together she would â€œreally impress himâ€ with her progress. They used to load up the family piano on the back of the wagon or sleigh, and take it to whoeverâ€™s house was hosting the Saturday party. What a time of good wholesome fun! Years later she would still be reaping the benefits of those lessons, as she spent many evenings in Altamont, playing for the Old Time Fiddlerâ€™s band while Jim and friends would dance. In her late eighties and nineties, she led a weekly sing-song at the piano of the Chateau Renoir, Assisted Living Retirement Home helping her new friends enjoy their shared music of yesteryear. Her musicality touched many peopleâ€™s lives in beautiful ways. She is likely playing a jig with the late Winston Simpson right now, while Jim dances.

Ruby was a talented horticulturist. She could grow anything, anywhere. From football field sized gardens to her varying array of indoor plants, Ruby treasured each and every bud. She could take the most unfortunate of plants, on their way to the compost, and create vibrancy. She was highly involved with the horticultural society in Miami for years. Her favourite flower was the lady slipper. After Jim died, she downsized her apartment but not her plants. She wanted to make sure another generation would have enough to carry on her love and talent of stewarding plants to germinate, grow, thrive, reproduce and begin anew.

Ruby married Jim Simpson in 1946 at the La Riviere home of her sister, Elva Scarf. They began farming south of Altamont on the â€œBennettâ€ place, and they enjoyed many years of neighbourhood parties and television at the home of Glen and Vera Cook. The Grahams, Cudmores, and Simpsons traveled to the Cookâ€™s Saturday evenings for fun, cards, hockey, and wrestling. In the early years, these neighbours, as well as Stockfords and Hughes, hayed together in the summer, and harvested together in the fall. The women cooked delicious meals and desserts. Oh the pies Ruby could make!

Jim and Rubyâ€™s only child, Janie, a miracle baby, was born in 1947. A few years later, in 1954 and again in 1957, Ruby would be separated from her husband and child for months and months battling tuberculosis. Health issues would plague her entire life but would never crush or define her.

Jim and Ruby moved to Winnipeg in 1967, where Ruby enjoyed the city life, making friends, joining various knitting/ sewing/horticultural clubs. Jim and Ruby also started to take trips to various exciting places: California, Arizona, Texas, Ontario, and BC. They even flew to Hawaii and Mexico to get a little break from winter. The highlight of their travels was taking each grandchild individually to Disney!

Daughter Janie married Donald Orchard in 1969, and so Ruby gained a son. Janie and Donald moved to the farm in 1973, and Ruby and Jim came to visit as often as possible becoming life â€œhelpersâ€. With three grandchildren- Eric, Arlene and Onalee were born in the 1970s- the grandparents became essential to helping change diapers, wipe away tears, sew clothes, knit blankets, babysit, teach music and dancing, and even chauffeuring. Ruby and Jim moved permanently to the farm in 1980, much to the grandkids delight! Grandma and Grandpaâ€™s house became the â€œhome away from homeâ€ where singing, dancing, playing games and laughter could be heard for miles, as well as the intoxicating smells of Rubyâ€™s cakes, cookies, and pies. ( She baked money into Angel Food birthday cakes!) Her home was always a warm and loving retreat for hosting the rambunctious three.

Jim and Ruby became involved in the community: the Altamont Church, the Miami Horticultural society, the 4H Beef Club, the school Adopt a Grandparent program, the Old Tyme Dance circuit, and the Winston Simpson Band. Ruby loved playing the piano, and she and Winston shared the true kinship of musicians.

Ruby was known for her charismatic emcee abilities, and there are many fond memories of Ruby at the helm, leading an audience into guttural cry-laughter as she shared stories, pretended to hoard chocolate bar prizes, and cleverly guided ceremonies with her wit and humor. She was a natural comedian.

Ruby was highly creative. She loved to knit and sew, and she could whip up a prom dress in a few days that fit like a glove and made the garment-donner feel like a princess. She created hundreds of items of varying textiles, and then she would decorate and produce whatever Janie could dream up! She knit sweaters and blankets, and she was famous for her colourful knit socks, which the grandkids wore to holes. She loved fixing all of the jeans in our short family- cutting off the cuffs, turning them up, and then, just like in the STORES, she would sew the cuff back on. Magic. She even sewed treasured â€œjeanâ€ blankets that she made from all the jeans she saved from the grandkids through the years. Archie and Oscar also received toques and mittens, curtains, and colorful jean patches. She also loved to decorate and paint- in fact, she had one of the only kitchens in southern Manitoba to host multi-colour cabinets. There were many sponge-painted bedrooms, and striped painted bathroom walls as well! The sky was the limit to Rubyâ€™s creative flow.

Ruby and Jim left the farm after 31 years, in 2011, to move to Calgary when accommodations beside Onalee and Steve and one-year-old Oscar became available. They began being the family â€œhelpersâ€ again with babysitting, lawn mowing, vacuuming, house fixes, leaf raking and pancake breakfasts, as Eric and Arlene also lived in Calgary. They were overjoyed to be available when Archie (great grandson number 2!) arrived next door, and they were able help bathe Oscar while Archie was being put to bed, and cuddle baby Archie while Oscar was being a very busy toddler. A lovely symbiotic relationship of love and adoration.

In 2013, Ruby and Jim moved to the Chateau Renoir and quickly became involved in all sorts of fun activities. Ruby loved making friends at the residence, and she leaves behind many lovely connections. From leading sing-song on the piano, to chatting with beloved friends in the sunshine, to playing BINGO in the games room, to eating meals together, to watching Oscar and Archie in the pool, to New Yearâ€™s Eve galas, to food tastings, to trivia nights, Ruby did it all. Ruby and Jim once were the only people in the Canada Day walker parade, and they pranced down the aisle, big smiles on their faces, their walkers covered in Canada ribbons, their wardrobes red, and loud (they had no idea theyâ€™d be the only ones to participate). Instead of fading into the woodwork, they proudly rose to the occasion and entertained, strutting down the aisle of on-lookers, waving and smiling, making the Activity Director eternally grateful! The Chateau Renoir was a beautiful place to live out their last years of life, surrounded by fun and friends, with family nearby.

Grandma Ruby, Grams, GGmaâ€¦ Ruby was the hub for the family. She knew when Janie and Donald would be in town, when Eric and Steve were flying, when the boysâ€™ recitals were happening, when Arlene was singing somewhere, and when Onalee was playing frisbee. She kept everyone connected, informed, and together. She loved spending quality time with her family, and she loved everyone unconditionally- she cherished every moment she had with the family. She was an incredible listener, communicator, and friend.

Ruby was a delightful spirit, who loved to laugh and joke, who enjoyed music, TV, food, but mostly friends. Her mind was sharp right to the end, and the family enjoyed the last evening with her as she talked and sang and laughed. Her peaceful departure was a reward for a life lived giving her talents and smiles freely: a bright, colourful light who will be dearly missed.

Those wishing to view a livestream of the service may do so at: