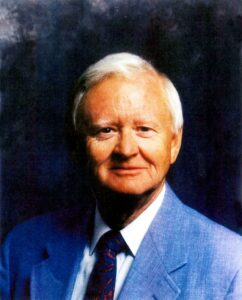 CHRISTENSEN, Royal Jay June 4, 1923 Magrath, Alberta – beloved father, grandfather and great-grandfather, passed away on Thursday, July 26, 2018 in Calgary, Alberta at the age of 95 years. Jay was born in Magrath, AB on June 4, 1923 and was raised on a farm bordering the St. Marys River – 7 miles west of Magrath. Jay went to the St. Mary School that was located 1 mile east of his farm home. He completed the 8 grades taught there in 6 years. Jay went to Magrath High School and graduated in June 1940. These were World War II years with its demand for service men for overseas duty. Jay enlisted in the RCAF on June 26, 1942 at the age of 19. Jay trained as a radar technician and spent much of the war in North Africa and East Africa. He remembered those years with great lucidity right to the end. Jay married Leola Bennett on July 15, 1946 and started their family (Cathi, Rod, Scott) a few years later. Jay graduated in the Phi Kappa Phi Honor Society as a petroleum engineer from the University of Houston in June 1952. Jay worked in the oil business in various places in the world for over 40 years. Jay is survived by his daughter Cathi Hatch; son Rod (wife Brenda); and son Scott (wife Kendell) and 15 grandchildren and 31 great-grandchildren. Jay is also survived by his wife June Welling and his sister Elaine. Jay will sadly be missed by his family and friends. Funeral services will be held at Church of Jesus Christ of Latter-Day-Saints Willow Park Chapel at 940 Acadia Drive SE, Calgary on Saturday, August 4, 2018 at 10:00 am. Family Graveside service to be held later that day at the Magrath Cemetery at 4:00 pm. Contributions to Canadianlegacy.org or Wounded Warrior in lieu of flowers would be appreciated.