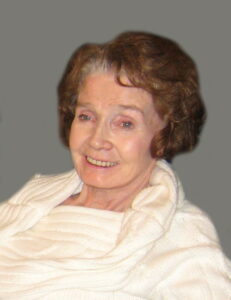 Rosanne Holt passed away peacefully on Monday, April 6, 2020 at the age of 79 years. She will be lovingly remembered by her husband of 59 years Don Holt; children Cherie Holt, Trevor (Sandra) Holt, Brent Holt, Troy (Liliana) Holt; grandchildren Mitchell, Larissa, Ryan; sister Jessie Fitzpatrick, brother Bruce Wood; many nieces, nephews, and extended family. She was predeceased by her siblings Wallace, Eunice, Jenny, and Brent. Rosanne was born in Lucky Lake, SK. She was raised in Demaine, SK and later moved to Brooks, AB where she met the love of her life, Don at the local Dance. They were married in 1961 and began their family in Rolling Hills, AB. A couple years later the Holt family moved to Calgary. Family was everything to Rosanne; she loved being a mom and left her legacy on every aspect of their home. She enjoyed cooking and had a passion for gardening. She found comfort and joy in music; her and Don continued to dance cheek to cheek throughout the years. May she dance on in our hearts.