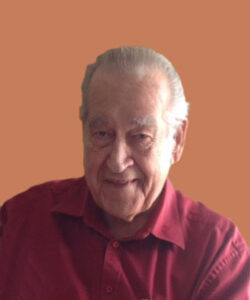 Ron Brown passed away on Tuesday, November 25, 2014 at the age of 84 years. He will be lovingly remembered by his sons Larry and Lorne; grandchildren Christopher (Samantha) and Jennifer; love of his life great granddaughter Chloe; and many more family and friends. He was predeceased by his first wife Florence and then recently his wife Yutta; parents John and May Brown; brother Victor; sister Patricia; nieces Margaret, Rhonda, Vicki; nephew Jack of the Murdocks. Ron was born at James River Bridge, AB where the family had a farming/logging operation. He moved to Calgary working as a teamster including hauling for Canada Dry until starting with The City of Calgary in 1951 as a heavy equipment operator. During a long career with the City he was as active member of C.U.P.E. local 37 proud of many contracts under Mayor Rod Sykes. Ron was very proud of being honoured by the Governor General of the Canadian Government with a medal commemorating Her Majesty’s 25th Anniversary of Her Reign. A Visitation will be held for Ron at Pierson’s Forest Lawn Chapel (4121 – 17 Avenue SE, Calgary) on Tuesday, December 2, 2014 from 6:00 – 8:00 p.m. A Graveside Service will then be held at Queen’s Park Cemetery (3219 – 4 Street NW, Calgary) on Wednesday, December 3, 2014 at 11:00 am. If friends so desire, donations may be made to the Calgary Poppy Fund (www.skbvideo.com/poppyfund) or the Royal Canadian Legion Branch #285 (9202 Horton Road SW, Calgary, AB T2V 2X4)