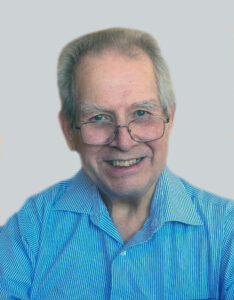 Ron Cree passed away on Sunday, July 17, 2016, with his entire family surrounding him, at the age of 84 years. He will be lovingly remembered by his children Lynne Corner of England, Debbie (Grant) Wight, Richard (Kiima) Cree, Becky Cree and James Cree, all of Calgary; grandchildren Spencer (Catherine) Wight, Brandon (Marisa) Wight, Jesse Wight, Riley Wight, Braedon Cree, Chloe Cree and Beckham Cree; great grandchildren Gabriel Wight and Lydia Wight; brother Arthur (Rosalie) Cree of England and many more family and friends. He was predeceased by his loving wife Cathie and is now happily reunited with her. He is also predeceased by his brother Ian Cree, and his parents Robert and Evelyn Cree. Ron was born and raised in Yorkshire, England where he met and married the love of his life, Cathie. They were married on June 4, 1960 and spent the next 55 years together until Cathie’s passing on April 18, 2015. Lynne, Debbie and Richard were born in Leeds and Becky and James joined the family in Calgary. Ron joined the Church of Jesus Christ of Latter-day Saints in Leeds in 1959 and was a faithful member for the rest of his life. He especially loved sharing the gospel with anyone and everyone he met. Ron was a singer all his life starting as a choir boy in the Church of England, singing in night clubs as a young man, and in church for many years. Ron loved talking to people, a talent which he used extensively in his occupation as a taxi driver for about 30 years. He also enjoyed woodworking and spent the last year of his life building model ships from his memories of his years in the Royal Navy. His greatest love was his family and he loved spending time with his grandchildren and great grandchildren. A visitation will be held for Ron at Pierson’s Forest Lawn Chapel (4121 – 17 Ave SE, Calgary) on Wednesday, July 20, 2015 from 7:00-9:00 p.m. A Funeral Service will be held at the Church of Jesus Christ of Latter-day Saints – Foothills Stake Centre (30 Everstone Blvd. SW, Calgary) on Thursday, July 21, 2015 at 11:00 a.m. with viewing starting at 10:00 a.m. Interment will follow at Okotoks Cemetery.