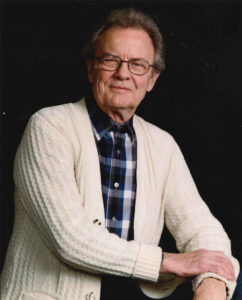 It is with heavy hearts that we announce the passing of Dr. Roger James McHan on Wednesday, November 4, 2015 at the age of 90. He will lovingly be remembered by his wife Julie (Oja) and his brother Richard; his children Sandy (Fen), Brian Oja, Gary (Lynne) Oja, Larry (Mary) Oja, and Samantha (John) Jackson; his 11 grandchildren Jennifer (Jonas), Spencer, Stanley (Teresa), Gary Jr. (Karin), Davin, Saxony (Tony), Larry Jr. (Brandy), James (Tracy), Luke (Crystal), Charlie, Emily (Kyle); and his 14 great grandchildren. He was predeceased by his parents, his first wife Pauline, and his step son Daryl. Roger was a wonderful, kind, soft hearted gentleman. He will always be remembered as a clever man with a passion for his family, his dogs, his sweets, and his collections, especially his collection of elephants. Roger was born in Idaho Falls, Idaho, and came to Alberta in his earlier years. He became a successful Chiropractor, running his own practice in Calgary from 1955 to 1980. While friends for many years, after the passing of their spouses, Julie and Roger were married on March 19, 1993, and had many happy memories as husband and wife. Roger’s memory will always be cherished and never forgotten. A Funeral Service will be held for Roger at Pierson’s Forest Lawn Chapel (4121 – 17 Avenue SE, Calgary) on Thursday, November 12, 2015 at 2:00 pm.