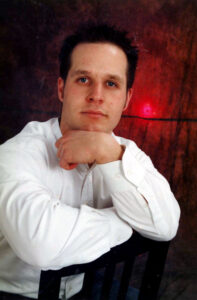 Van was born in the Calgary General Hospital, July 13, 1979. With our family, he lived in various Calgary homes until we moved to Bearspaw Road. There, he lived until he reached adulthood.

Much of his education time was spent in Cochrane schools. He was an athlete and enjoyed swimming, skiing and playing hockey. Grade twelve was taken at Bowness High School. Here, he enjoyed learning and truly liked playing Rugby, which he learned that year. He played a good game and made some great friends.

I think he even passed grade twelve.

Van then went on a mission for the Church of Jesus Christ of Latter Day Saints. He spent two years in Ft. Lauderdale, Florida, working with Haitian immigrants. He learned the Haitian language, helped many learn the Gospel and left with numerous good friends.

Upon his return from Florida, he began full time employment. He spent time in the drywall business, the “oilfield core business” and his last job was with a large Ford dealership where he sought to train and become a “mechanic.” He really enjoyed this job, even though it was a bottom level, doing basics such as changing oil and tires.

Vans cancer fight began in 2014. He’d had a serious headache for a week. When this was diagnosed, it was found he had Glioblastoma cancer. This was at a Level 4, even though there had been no previous problems. This is how this cancer works.

The cancer was removed but we were told it would be back on its schedule.

He had his second cancer operation February of last year. He was keen to return to work but his cancer immediately returned. He never made it back.

Van accepted the fact that this cancer could not be beaten. In January, he could not move his left leg. Nothing could be done to change this as the cancer had moved into the middle brain area of body control. We moved him to the Southwood Hospice which is on Heritage Drive SE.

Wonderful men and women from Africa, Europe and the Philippines worked closely to make Van’s stay and that of their other patients, as comfortable as possible. His stay was one of the longest for some time and many members of this group treated him as if he was their child. He loved them and they loved him.

It was a wonderful experience for all of us.

Van passed away the morning of Thursday, April 20th around 7:30 a.m. He had some problems breathing. My sister Kristine and I had been called, informed and asked to come to his room. We did and the problems seemed to soon be fixed. All left the room but us.

Van breathed better than he had been. We watched him closely. Suddenly, he took two breaths and none followed. It was a sad moment for us, but we knew his pain was gone and his Spirit was well. He is now with his mother and family. I am sure he is happier than he has been for quite awhile.