You are here: Obituaries / Robert Fergusson 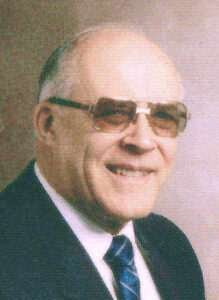 Robert (Bert) Fergusson passed away after a lengthy illness with vascular dementia with his family at his side at the age of 83. Robert was born in Winnipeg on September 2nd, 1930. He was raised and educated in Winnipeg. He started to work for Cronkhite Plumbing and Heating in 1949. In Winnipeg, on February 27th 1953, he married the love of his life, Clara, then moved to Calgary where he has resided since. He was a graduate of Mount Royal College with a degree in accounting. He worked for Cronkhite Plumbing and Heating for many years before going to work for Parkdale Plumbing and Heating; a division of Keith Construction. Later, he joined forces with Vic Snowden and formed Phoenix Metals. Eventually Bert and his partner bought the company. He was half owner and President until his retirement in 1997. He is survived by his loving wife Clara of 60 years, a son, Bruce (Pat) Fergusson, two daughters; Loreen (Tom) Alcock and Beverley Fergusson (Don Armstrong). He also leaves to mourn his passing five grandchildren; a grandson Terrance and four granddaughters; Tracey (Jay), Amanda (Scott), Ashley (Jordan) and Samantha (Brett); two great granddaughters, Aliza and Katrina and one great grandson, Xander. He was predeceased by his father, mother and two brothers; James and David, as well as his grandson Sigmund John and a great grandson, Tyler Robert. He is also survived by several nieces, nephews and several cousins. Pierson’s Funeral Home is in charge of arrangements. A Memorial Service will be held at Centennial Presbyterian Church, 103 Pinetown Plc. N.E. Calgary, AB. The family would like to thank the staff at Hillcrest Nursing Home for the great care that Bert received during the last four years of his life and especially at the end. The staff were kind and very considerate of the family’s needs at all times. In lieu of flowers, the family would like to suggest a donation to the Canadian Cancer Society, the Alzheimers Society, Champs, or the charity of your choice.