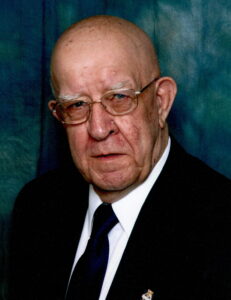 Bob Deans passed away peacefully on January 20, 2021 at the age of 93 in Calgary. He was the final surviving member of his immediate family. Bob will be sadly missed by his wife, Shirley Deans, with whom he recently celebrated their 69th Wedding Anniversary.

Robert Eddington Deans was born in the Deans family farmhouse NE of Three Hills, Alberta. He was the youngest child of Scottish immigrants, John and Margaret Deans and was extremely proud of his heritage. He started his schooling at a one-room school called Turtle School. From Grade 9 to 12, he attended Three Hills School, riding his saddle horse 5 miles each way to and from town for those entire school years.

Bobâ€™s work career included elevator construction for Alberta Wheat Pool, Cat-skinner for the MD of Kneehill, Elevator Agent for Searle Grain and finally a barber. He operated Bobâ€™s Billiards and Barber Shop in Three Hills from 1963 to 1989. Bob and Shirley then retired to Airdrie and Calgary.

Outside of spending time with family, Bob would tell you that his most cherished memories were leading the Three Hills Elks Patrol Team from 1956 – 1989. This was a highly competitive and respected team in B.P.O. Elks winning many District, Provincial and Canadian championships. He is a Life Member of the Elks Lodge.

Bob will be remembered as a kind, gentle soul by all who knew him. May he Rest in Peace.

Funeral Services will be held for Bob at a later date. If friends so desire, donations may be made to the Canadian Cancer Society (www.cancer.ca/donate) or a charity of your choice.