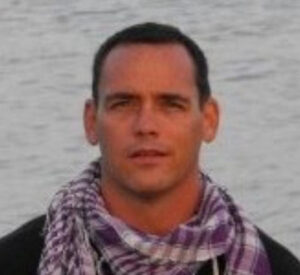 Robert David Nelson passed away in a tragic accident on June 21, 2013 at the age of 41 years. Rob is survived by his wife, Jennifer Anne (nee Deller), and six wonderful children: Taryn, Seth, Eton, Maysa, Asher, and Ellery – each of whom will miss their father greatly. Rob is also survived by his father-Steve, his mother Laurel (Hughes), his older brother Rick, and numerous aunts, uncles and cousins. Rob was born and raised in Calgary in the southwest community of Glamorgan. He attended Glamorgan Elementary School, AE Cross Junior High School and Ernest Manning High School. He loved to camp, fish and hunt alongside his brother, dad and grandfather. This was a tradition that he has carried on with his own sons. During his school years, Rob was involved in any and all sports, but eventually settled on the triad of football, wrestling and rugby. He excelled at wrestling and was a member of the Alberta Amateur Wrestling Club, ranking 5th nationally. Lessons on the subtleties of wrestling techniques were a weekly occurrence in the living room with all of his children eagerly piling on top of him. Rob wore many hats when it came to settling into a career, including refrigeration mechanic with Chinook Refrigeration and insurance sales with Cooperators as well as State Farm. Rob soon discovered that he had many more talents he wanted to develop. He upgraded his education and graduated from University of Lethbridge with an International Management Degree and from Queen’s University with a Law Degree. He initially worked at Gowlings in Calgary and then moved his family to Dubai to practice law another family adventure which they all enjoyed. Upon returning to the City of Calgary, Rob worked at the law firms of Osler’s, and then Bennett Jones. In the fall of 2012, Rob decided to quit the practice of law and pursue his ultimate dream of being a land developer. Within a few short months Rob had successfully negotiated and implemented several land development initiatives. Rob loved his family, his friends, and his faith. Rob was a faithful member of the Church of Jesus Christ of Latter-day Saints. He was sealed for all time and eternity to his wife Jennifer in the Mesa Arizona Temple on October 23, 1999. He loved to support the missionaries and the missionary work of the Church. Rob had the unique gift of making everyone he knew feel special and important, and he was a great communicator and negotiator, who strove for fairness and reasonableness in all of his personal and business dealings. Rob always wanted both sides of a contract to be winners, and as a result he was well respected by all those he dealt with. He loved to give service, not only to family and friends, but to his neighbours and community. Rob served as a volunteer director the New Heights School and Learning Services for many years. Rob loved to make and eat great food at home, or to enjoy gourmet food at restaurants. He loved to cook for gatherings of family and friends as well as Church socials his pig roasts were famous! All are invited to a service to be held in Robert’s honor on Saturday, June 29 at 11:00 a.m. at The Church of Jesus Christ of Latter-day Saints Foothills Stake Centre, #30 Everstone Boulevard S.W., Calgary, followed by interment at the Okotoks, Alberta Cemetery. Messages of condolence may be forwarded to the family at www.piersons.ca If friends desire memorial donations may be made to the Canadian Red Cross Alberta Flood Relief, www.redcross.ca