You are here: Obituaries / Robert Colborne 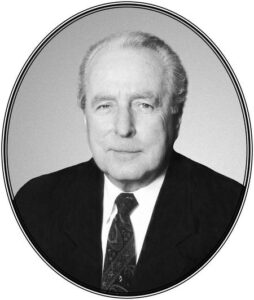 It is with profound sadness that we announce the passing of Robert Colborne (R.B.) after a brief illness on Tuesday, May 15, 2012 at age 85 years. Born January 11, 1927 in Calgary, Alberta the son of James (Jim) Blair Colborne and Sarah Anne McGilivary; Robert is remembered by his loving wife of 63 years, Jeanne; children: Rick (Lori), Lynne (Dennis Brennan), Michael (Barbara), and Catherine (Rob) Vogelgesang, (he was predeceased by his daughter Dawn 1979); nine grandchildren: Leah (Cam Adam), Sarah (Scott Weaver), Erin Brennan, Mallory Brennan, Celeste Colborne, James Colborne, Shane Vogelgesang, Kyle Vogelesgang, and Nicole Vogelesgang; brother-in-law John Poitras (Noreen); sisters-in-law: Antoinette Simard and Dorothy Colborne; and numerous nieces and nephews. Robert was predeceased by his father James and his mother Sarah (nee McGilivary); brother Hank; sisters: Norma (Smith) and Jean (Carr); and brother-in-law Allan Carr. Bob was very proud of his children and their accomplishments and his grandchildren were a delight and very special to him. A man of faith, he was devoted to his church and community. Bob was compassionate, generous and was never too busy to help a friend or associate. He thrived on finding solutions and made a difference in many people’s lives. Bob enjoyed the outdoors, going to his cottage at the lake, boating and being surrounded by his children and grandchildren. His family will forever cherish happy and loving memories of their special time with their father and grandfather. As Founder and Chairman of the Pacific Western Group of Companies, R.B. was a man of integrity, with a deep commitment to his values and with his tremendous confidence in people he built one of North America’s largest (privately held) people transportation companies. After graduating at age 17, R.B. enlisted with the Air Force and then the Army and was dispatched to Toronto. While in training, the victory in Europe was imminent and R.B. was not called to active service. He always felt deeply that his decision to enlist ensued from his deeply held sense of duty to his country. In 1946, R.B. returned to Alberta, attended the University of Alberta and was a member of the Golden Bears hockey team, where he played left wing. Along with his teammates, the Golden Bears were Western Canadian Intercollegiate Hockey Champions of 1946-47 and 1947-48. R.B. was a lifelong sports enthusiast who enjoyed watching hockey and football. Bob began his career in 1949 with General Motors Acceptance Corporation working in both Calgary and Edmonton. He was energetic, hard working and in 1956 purchased Wetaskiwin Motors Ltd. where he became dealer principal. R.B. developed a special connection with the people transportation industry and in 1961 he purchased Sorensen Bus Lines of Red Deer. (The business was renamed Prairie Bus Lines Ltd). Always a man open to an opportunity, R.B. was also innovative and in 1964 he formed Diversified Transportation Ltd., providing transportation for construction workers at the Sheritt Gordon plant site in Fort Saskatchewan. Now almost 50 years later, Diversified continues to provide employee transportation services to the Oil Sands and Construction industries throughout Alberta and Canada. As his business began to span the country, he remained determined while he undertook challenges with the same enthusiasm as he lived his life. While living in Wetaskiwin, he was an active member of the community, President of the Kinsmen Club, Chamber of Commerce member and served a term as Mayor of the City. Bob always felt it was important to give back to the community. For eight years, Bob also served the province of Alberta on the Auditor General’s Audit Committee and also was a Board member for the Strathcona-Tweedsmuir School in Okotoks. Bob was a founding member of the Van Horne Institute for International Transportation and Regulatory Affairs. The Institute was established to assist industry, government and the public addressing issues affecting transportation and supply chain logistics. He also served as President of the Western Canada Motorcoach Association and made substantial contributions to the industry. In recognition of Bob’s contributions, the Ontario Motor Coach Association honoured him with a Lifetime Achievement Award. From a humble beginning and starting with a modest school bus operation, R.B. spent the better part of his life building a well-respected family owned-transportation company. His passion was to elevate the image of the passenger transportation industry and one of his innovations was the introduction of Alberta’s very successful Red Arrow Motorcoach service. Throughout his business life, he was truly appreciative and grateful of all employees and their contributions to the organization. Bob achieved his goals and much more. He earned a position of high regard as an industry pioneer, visionary and innovator but his most enduring legacy will be his accomplishments as business leader, mentor and most notably as a husband, father, grandfather and great grandfather. He was much loved and will be missed by both family and friends. A Prayer Service will be held on Thursday evening, May 17, 7:45 p.m. at St. Cecilia’s Roman Catholic Church, 321 – 90th Avenue S.E. Calgary. A Mass of Christian Burial will be Celebrated at St. Cecilia’s on Friday May 18, 2012 at 10:30 a.m. Father Leo Felix Monroe, Celebrant. A reception following the Mass will be held at Spruce Meadows Congress Hall. In lieu of flowers, memorial tributes may be made directly to the Learning Disabilities Association of Alberta (LDAA) 340 – 1202 Centre Street SE, Calgary, Alberta T2G 545 or The PREP Program, Woodbridge PREP Centre 2004 – 12 Avenue NW, Calgary, Alberta T2N 1J7. Messages of condolence may be forwarded to the family at www.piersons.ca.