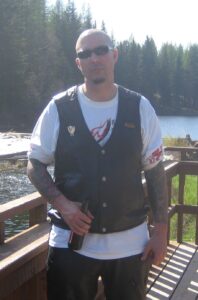 Robert “Bruce” Kozicki, of Calgary, born May 21, 1967, passed away suddenly on January 1, 2022, at the age of 54. Rob is survived by his son Chance; mother Susan Kozicki; brothers Al and Chad; nephews Kael and Chase; and niece Paige; as well as Chance’s mother Karen; and numerous aunts, uncles, and cousins in Sherwood Park and Edmonton. He was predeceased by his father Robert Henry Kozicki. Rob was born in Edmonton but raised in Calgary.  There are many memories we all share of him. He was a strong, caring, sociable “gentle giant”, who had the best sense of humor. He was one of the original “Trailer Park boys” as friends called him and was always the life of the party. He loved Harley Davidson’s and the Forest Lawn area of Calgary; there were many hangout spots Rob went with his crew. Kdogg will be deeply missed by so many.

As a memorial to Robert, donations can be made to the Heart and Stroke Foundation of Canada.
Hugs from home can be submitted under the resources tab.