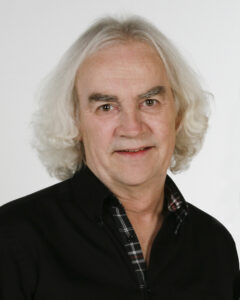 Richard “Rick” Buck died peacefully in Calgary at Agape Hospice on March 24, 2015 at the age of 60 after a long battle with cancer.

Rick was born on July 19, 1954 in Montreal and made Calgary his home in 1967, finished high school at Lord Beaverbrook and went on to the University of Calgary where he graduated with a business degree. He joined Price Waterhouse and achieved his Chartered Accountant designation in 1979. He later started his own consulting business. Rick was an accountant and software designer by day and guitar player by night, known for his amazing riffs, and Gibson and Fender guitar collection.

While in University he met Kathy and they began their flamboyant adventures traveling, creating family and building community with many social events. The birth of their two sons shifted his world and he became a hockey dad, never missing a game. Rick was a Board Member at Waldorf School and Foothills Academy, where their sons attended school.

Rick’s strong will was evident when first diagnosed with cancer 24 years ago. He never gave up. He had a powerful career with his brilliant mind, outrageous Albert Einstein hair and well set opinions. He will be lovingly remembered by family and friends for his rich life, musical talent, extreme generosity and kindness.

Sincere thanks are extended for the compassionate care and loving kindness from Dr. Steven KH Aung of Edmonton, the team at the Tom Baker Cancer Centre led by Dr. Dean Ruether, and Dr. Michael Sia, and many caregivers.

A funeral service in Rick’s honour will be held on Monday, March 30 at 2:00 pm at the Hillhurst United Church, 1227 Kensington Close NW. A reception will follow. If friends desire, memorial tributes may be made to Angels Anonymous (www.angelsanonymous.org) or to the World Natural Medicine Foundation ( contact Dr. Aung’s office for details 1-780-421-4777).