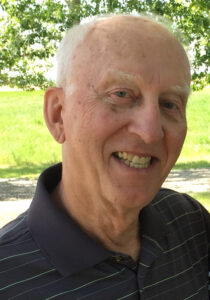 It is with profound sadness that the family of Richard John Lozanski announces his passing on Monday, October 18, 2021.

He will be forever missed as much-loved husband of Annette, dear father of Kristin (Tim), Nicole (Steve), Paul, and Lisa (Ken), and Dziadzia to Rowan, Evan, Harris, and Lawrence. He also leaves behind sisters Fran and Jo. He is predeceased by his grandson, Anthony, parents John and Mary, his brothers Casey, Stan, Ed, Ted, and Walter and his sisters Jean, Lil, Win, and Vicky.

Born in Winnipeg, Manitoba, Richard was an accomplished athlete, recognized in the Bison’s Walkway of Honour at the University of Manitoba. Richard moved to Calgary in 1969 where he began his teaching career at St. Margaret’s School. He joined Father Lacombe High School as a social studies teacher in 1978. He coached hockey, baseball, basketball, volleyball, and track in schools and in his local community. Retiring after 41 years of teaching, Richard became a deeply involved member with the Knights of Columbus and the Society of St. Vincent de Paul at Holy Trinity parish.

Richard always looked forward to a conversation. His humility and genuine curiosity led him to chat with, and learn from, anyone he encountered. He was beloved by his former students and was regularly stopped by them when their paths crossed. Richard loved music and dancing. He was never afraid to be silly or to play, and he brought a light-heartedness to any situation.

Due to COVID-19 restrictions, a Funeral Mass will be held by invitation on Saturday, October 23 at 1 p.m. Click here to view the service folder