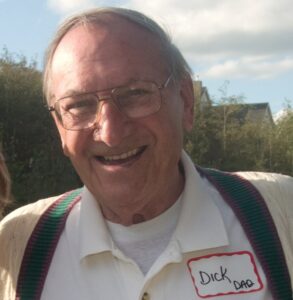 Richard “Dick” Shand passed away peacefully in Calgary at age 94.

Dick was born and raised in Toronto and loved to recall stories of football heroics at Runnymede Collegiate. After high school, he entered into the armed forces to help train troops in WWII and then earned his Engineering Degree from U. of Toronto.

In 1952, he married Elizabeth Chadwick and shortly thereafter moved to a job in Montreal. Three children later, in 1966, with political turbulence in Quebec and many companies vacating, the family relocated to Toronto and then followed his career west to Calgary in 1975, where they remained.

However, as much as his professional accomplishments in engineering, Dick took particular delight in other pursuits including writing childrens stories; poems for special occasions; volunteering to teach English as a second language, and do it yourself projects – often featuring duct tape.

Dick will also be remembered for his “punny” jokes, his kind heart, and his courage in dealing with health setbacks as age and illness took away his physical abilities and independence.

As it became evident to him that his life on earth was coming to an end; Dick took great comfort in knowing that he would live on through that imparted by him to his family and friends. Rest in Peace Dick; you have left the world a better place and those who loved you so will do our best to take your spirit and wear it well.

A private memorial service will be held in Calgary at a date to be determined and Dick and Libby will then be together again, at rest in Chance Harbour, New Brunswick, a very special place to them.