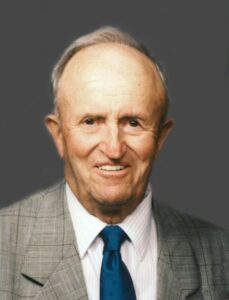 Ralphs greatest enjoyment in life, besides his wife, children, grand children, great grandchildren and Church was his zest for Aviation and Flying. He truly loved his airport and airplanes.

As a fitting final send off a Memorial is scheduled for Saturday June 2, 2018 at the Airport he established the Indus Airport starting at 1300 hours (1PM).

It will be a “fly in” or “drive in” event held in the newest and largest hanger on the North End of the Airport. It is scheduled as a sit down Memorial with an “open mike” for about one hour or so followed by Ralphs favourite food Smokies and Burgers with soft drinks.

His 1965 Ford Thunder Bird, Indian Replica Motorcycle and P51 Mustang replica will be on display.

Family and Friends look forward to seeing you there!

Ralph Copeland Winters, believed to be the longest living Winters family member, passed from this life and has now joined his beloved wife of 75 years, Lois. We know this reunion was tender and sweet as Ralph deeply loved and missed her and looked forward to this, his next step in his (their) Eternal Journey made possible by the Atonement of Jesus Christ. He also looked forward to being re-united with his Earthly Parents and siblings once again as well as his many friends and relatives that have gone before him. Ralph had deep rooted religious convictions and looked forward, more than most people do, to be able to pass to the other side and re-unite with and serve his Father in Heaven, under the direction of our Lord and Savior, Jesus Christ.

Ralph was predeceased by his parents Milton and Marjorie Winters; and his brother Murray and sister Ellen. He had a wonderful life which began with birth in the new home Milt and Marjorie established on the land that Milt had broken from Virgin Prairie Land. He grew up in the house that he was born in which Milt always referred to as “The Bungalow.” Later Ralph would rear his family in that same house.

In his teens he met Lois Pearson, the love of his life, and they dated for several years. After they were married he joined the RCAF, where they were stationed in Toronto. There he learned about aircraft instruments and thoroughly enjoyed being a crew member of many different military airplanes evaluating the work preformed by his crew. The couple remained in Toronto until the completion of World War11 after which they returned to Calgary where they soon purchased the family farm from his father. In the early 1950s Ralph branched out from the farm and purchased land in the city of Calgary (10 St. and Gladstone Road S.W) where he built a Texaco Service Station. When he sold it in the mid 50s he was one of the very last Texaco independently owned Service Stations.

Ralph spent most of his life farming growing grain, canola, flax seed, grass seed, cattle, sheep, hogs, turkeys, chickens and milking up to 35 cows. What he enjoyed most about the farm was his Airport that he started to develop in 1971, as he began taking flying lessons. That airport is now home to more than 100 privately owned airplanes and has provided countless hours of enjoyment to hundreds of people as it continues to grow. Even in his last days, when his short term memory was failing, he always asked how things were at the airport and would say; “Is anybody flying?”

The most significant turning point in Ralphs life was in 1952 when he attempted to “straighten out” a couple of missionaries from the Church of Jesus Christ of Latter-day Saints. He had always had a “Spiritual Inclination” as was evidenced in his taking his Grandmother to the Baptist Church each Sunday, in Langdon, while he was growing up. At one time in his life he wanted to become a minister for the Baptist Church, but that never worked out. Throughout his life he enjoyed listening to the teachings of prominent ministers of the time such as Billy Graham, Jack Van Impe, Joel Osteen, and others. Since his, Loiss and Myrlas baptism in 1952 (One son was too young and the other two not born) Ralph has always been a faithful member of the Church of Jesus Christ of Latter-day Saints and loved to visit the Cardston Temple and do vicarious (proxy) ordinance work on behalf of his deceased relatives. Ralph and Lois served a two year mission working in the Bishops Storehouse where they helped provide necessities to the poor.

Ralph will be deeply missed by his Family, Friends and even his Care Givers of the last 3 years to whom we are very thankful for their kind service.

A Memorial Service will be held in July of this year (Stampede Week) to allow many of his Grandchildren and Great Grandchildren to attend. The date will be announced Later.

Messages of condolence and a desire to know the Memorial date may be forwarded to the family at www.piersons.ca