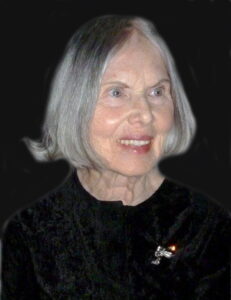 “A home is much more than a house built of lumber, brick, or stone. A home is made of love, sacrifice, and respect.” Thomas S. Monson

Phyllis was born into a loving home located over her parent’s grocery store in Mattawa, Ontario. She was the third child of Ernest “Ernie” and Mary “Mae” Wilson. The Wilson children were born 2 years apart starting with Clarence, Clayton, Phyllis, Dalton, Ruth and 9 years later Lois who completed the Wilson family. Although Phyllis was born at the time when the great depression was upon her family, Phyllis never felt the affects of it as a child due to the resourcefulness and fun-loving environment that her parents created. The love, respect and devotion she felt growing up created the loving and devoted person she became, and she carried that with her as a pattern to follow when she left her parents home to go build her own home and family.

“Women who make a house a home make a far greater contribution to society than those who command large armies or stand at the head of impressive corporations.” Gordon B. Hinkley

Phyllis married Murray Maher and they rented a room for $26.00 a month. She learned that with a little bit of paint, a few nice pieces of furniture and lots of love that even the smallest of spaces can transform into a place where she would call “heaven on earth.” Regardless if her home was first set up in Mattawa, then Toronto, on to North Bay, then Sudbury, and finally Calgary… her home and children were her greatest work and her greatest joy. The bible says, “Happy is the man that hath his quiver full of them” and this proved correct for Phyllis. Her large family of eight children came quickly. By the age of 30 years old she had four boys and four girls who were 1 – 2 years apart starting with Donna, William “Bill”, Deborah “Debbie”, Gail, Gordon, Mark, Pamela “Pam” and Stephen. With her quiver full and her work endless, she never complained. She never blamed her children for the enormous number of daily tasks, rather it was the clock that was at fault. She often said, “The day does not have enough hours in it.” Due to her strong organizational skills she always maintained a clean and organized home with nutritious homemade meals. “Leftovers” became a staple food and she taught the principle “waste not want not.” No one growing up in the house knew the extent of the work it was for her to always keep hot meals ready, laundry washed, hung outside to dry and then ironed; floors washed and hand waxed; the grass cut; the house painted; the cars and the driveway washed weekly; all children clean, fed and ready for school. Her children didn’t know how it all magically got done while they had fun swimming, going on picnics, reading storybooks, singing songs, playing games.
Her hobbies were born out of necessity. When it was time for her to sit down at the end of a day, she sat with either a pair of knitting needles and grey wool yarn to knit mittens for the children to wear the following day, or a needle with thread to mend clothes, patch the torn out knees on pants or sew on buttons. She served her family tirelessly and endlessly while also keeping an eye open for her neighbours. As rain clouds rolled in not only would she run outside to gather in her drying laundry off the clothes line in her backyard, but also, she ran to fold the neighbours’ laundry for them too. Meals were not only made for her large family to enjoy but also for members of her neighbourhood and members of her church. She believed when she was in the service of others, she was serving God and she served God every day of her life.

“Thou shalt love the Lord thy God with all thy heart, with all thy might, mind, and strength; and in the name of Jesus Christ thou shalt serve him.” Doctrine and Covenants 59:5

All of the days that Phyllis lived, she loved the Lord God with all her heart, might, mind, and strength. She was raised by a God-fearing mother who walked Phyllis to church even in freezing temperatures. Her childhood home was filled with music especially with hymns.
Phyllis too, raised her own family this way. She played the piano at home; she was the organist at church; she conducted the congregation in singing hymns during Sunday worship; and she sang the hymns throughout her day as she did household chores. She taught her children about Jesus through singing songs about Him.
Her children were taught the gospel of Jesus Christ through her example of living the commandments of God. She prayed with her children daily thanking God for everything they had especially running water. In the early years when she first began her family, Phyllis lived in a location without running water or indoor plumbing which was no easy task to do at any time… especially during winter months. This hardship helped her to appreciate and give thanks for everything especially the things that most folks took for granted.
She particularly loved Christmas. Christmas was her favorite time of year. She made it magical for all her children. She ensured letters were written to Santa and then built anticipation for Christmas morning. Her Christmas baking was always made in advance and stored in the freezer. It was the treasure of all treasures for her children to sneak and eat straight from the freezer – sneaking piece by piece, row after row. As it disappeared, she would keep baking and refilling the containers. It is unclear if the shortbread ever was placed on a platter to thaw.
Phyllis became a member of the Church of Jesus Christ of Latter-day Saints. The manner in which the two missionaries found her and her small family proved to be one of the greatest blessings God gave to her. She could not keep the story to herself. It was rare that a Testimony Meeting went by at church that Phyllis would not share her conversion story. It was one of her most valuable treasures and she wanted to share it with everyone. She knew that God brought the Gospel of Jesus Christ to her. She held it sacred. Her natural talent was missionary work and she shared the message of the gospel with everyone. She was no respecter of persons when it came to discussing the Gospel of Jesus Christ.
She served in many callings in her church working in various capacities. She especially loved working with the children in Primary.
Upon her retirement from LDS Social Services she left her home, family and country to serve a full-time mission in Salt Lake City, Utah in the Family History department. Her passion for Genealogy work was clear to all. Her love to search for family names and then go to the temple to have their ordinance work done was her love. She testified throughout her entire life that “Families are Forever” and she knew it could be made possible through temple work. She knew one day she would reunite with her family in heaven with her Heavenly Father and her Savior Jesus Christ, and she prepared herself for that day.
She loved the Lord all her days and she looked forward to going back to heaven. Her last words she uttered while looking upward were, “God, take me home.”

A funeral service in her honour will be held at the Church of Jesus Christ of Latter-day Saints Parkland Chapel, 14540 Parkland Blvd. SE, Calgary, AB on Friday, December 27, 2019 at 12:00 noon with a visitation from 11:00 to 11:45 a.m. prior to the service. A luncheon will follow the service and we will conclude with a graveside service at the Rocky View Garden of Peace Cemetery.