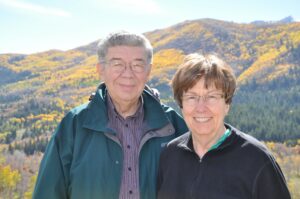 Phil Reginald Dickson passed away on September 8, 2021 in Calgary, Alberta at age of 84. Born in Lethbridge on December 22, 1936 to Phyllis and Redge Dickson, Phil grew up in Warner and was raised in ranching and farming. He loved spending time with his Grandpa Ross and cousins. As a teenager he loved to curl with his friends and had a job mowing grass along the highways.

In 1954, Phil began his studies at the University of Alberta and worked towards his bachelor of Science in Agriculture. He also participated in the LDS Institute and was an active member of the Aggie club and remained close with those classmates for decades. After graduation, Phil served a 2 ½ year mission in France for the Church of Jesus Christ of Latter-day Saints where he developed lifelong friendships with companions and friends he met. He served mostly in Belgium and ended in Bordeaux. The people there loved the Canadian missionaries as it was many Canadian troops that liberated Belgium.

After his mission, Phil moved back to Edmonton and decided to become a secondary education teacher and sought a bachelor’s of Education and later a masters in French literature. Phil and Sharon met at the Institute and their first date was at the Gold and Green ball at the institute and were married May 23, 1963 in the Cardston Alberta Temple.

Phil spent most of his career teaching French at Salisbury Composite High School near Edmonton where Phil and Sharon raised their three children, Brent, Shane, and Denise. As a father, Phil taught his children to work hard by starting a family landscaping business where he worked side by side with them doing yard clean up. Phil also loved to tinker in the garage, attend the symphony, and was a season ticket holder for the Edmonton Oilers and also loved attending Edmonton Eskimos football games. Phil enjoyed watching the games, but spending time with his family and friends was the real joy.

Phil was generous, kind and loving and a devoted member of the Church of Jesus Christ of Latter Day Saints. He served in many capacities but especially loved being a Bishop to a congregation of University students. Phil loved getting to know the kids and helping them as they planned their future lives. He brought this same level of dedication in his role as grandpa, and all rules that applied when his own kids were young got thrown out the window for his grandkids. In an effort to be closer to their family, Phil and Sharon moved to Calgary in 2016.

The Dickson family would like to extend their thanks to AgeCare Glenmore who took great care of Phil in his last days and to the many family and friends who have shown support during this tender time.