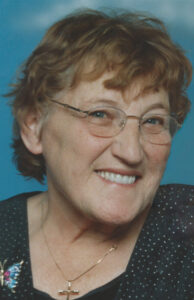 Predeceased by father Leonardus, mother Gertrude, sister Angela, son Johnny and husband Henry. Survived by and lovingly remembered by children William (Teresa), James (Sylvia), Shirley (Carlos), Marianne (Lyle), Katherine (Darrell), brother Leonard (Pauline), sisters Gwendolyn, Della, Mae and Rita (Michael), grandchildren Corey (Nicole), Cody, Krystal, Jonathon (Caiti), Jeremy, Ashelina, Taylor, Jordan and Alex, great-grandchildren Gabriel & Elias as well as many nieces, nephews, extended family and friends. Born June 25, 1937 in Calgary, Alberta. The story is that Nellie’s father had to drive her Mom to the hospital in a borrowed Model A car backwards up the Cochrane Hill as the gas tank was in the front below the windshield and the gas wouldn’t feed with the front of the car tilted up so it would only make it up the steep hill going backwards.She was born early at the HolyCrossHospital weighing just about 2 lbs but she was a fighter and soon with the special care of her Mother was a happy and healthy child. She spent most of her childhood growing up in Calgary just off of 14th St NW that is now Rosemont district. She enjoyed baseball in the summer and skating, skiing and sledding with her siblings in the winter. As with most kids, there was always work and chores to be done but she still found time to enjoy her childhood. She also loved to sing, especially in the church choir and later she spent time teaching Sunday school. She attended Capital Hill School, King George School, Balmoral School and Crescent Heights High School. She went on to graduate from Hollingshead Business College in 1954. In 1956 she met and fell in love with Henry Kolesar. She briefly worked for the City of Calgary but had to quit as they did not allow married women to work there in 1956 when she married Henry. She then worked for Canadian Freight Ways for 3.5 yrs until she became a stay at home Mom. That was not an easy job though. She had to tend a large garden, do yard work, heat water up on the stove as they had no hot running water, can many vegetables and such for the winter, cook and clean as well as take care of her children. She was a hard worker that often repaired clothes and sewed outfits for her children. She always made do and the kids came first. When her youngest child went off to school, she decided it was time to rejoin the workforce and got a job with Trimac and MBI Data Services in their data entry departments. She worked there until 1979 when she decided that it was time to move on and got a job at Canadian Occidental Petroleum. She worked her way up to supervisor of the data entry department and that was where she stayed until 1985 when she retired. At that time she joined her husband out at their farm in Winfield, Alberta and took up hobby farming. She loved being around all the wildlife as well as having her farm animals. By 1995 it was getting too difficult for Nellie and Henry to manage the farm as they both had health issues so they moved back to their house in Calgary. In 1999, after 43 years of marriage, Henry passed away. Shortly after Nellie was given, as a gift, her toy poodle Tuffy and he was her constant companion until his death in 2013. A while after, Nellie realized some of her life dreams of traveling. She toured the Okanagan Valley of BC with one of her daughters and also went to Las Vegas. She also enjoyed many camping trips with family out in Kananaskis and BC. Her and her sister Gwen spent 5 weeks traveling through Wales, England and Holland. She was happy to visit many family members as her mother was from Wales, her father was from Holland and her brother resides in England. In 2007 she again traveled to Las Vegas to see her grandson Jonathon get married. Nellie lived and was cared for at her daughter Shirley’s home for the last 2 years of her life where she was cherished and received all her wishes daily. She was always very proud of her children and grandchildren. Nellie loved knitting, crocheting, doing crafts and building jig saw puzzles. There was always a handmade gift when each of the new grandchildren arrived. Nellie also loved to garden. She always looked forward to spring when the perennials started to come up and when she could start planting again.Growing things brought her joy. Nellie was always very kind and generous. To know her was to love her. In lieu of flowers the family kindly request donations to the Lung Association or the Heart and Stroke Foundation. A Celebration of Nellie’s Life will be held at Pierson’s Forest Lawn Chapel (4121 – 17 Avenue SE, Calgary) on Saturday, September 12, 2015 at 2:00 pm.