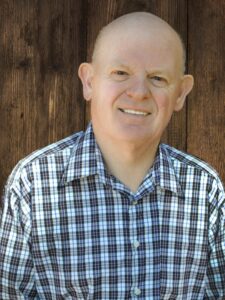 Blomfield, Peter John 23 Feb 1947 16 Feb 2017 We regret to announce the passing of Peter John Blomfield on February 16, 2017. After a courageous battle with cancer Peter passed away peacefully at home. He will be deeply missed by his beloved wife Mary; his ten children Neil (Jane), Paul (Sarah-Jane), Sally (Simeon), Stephen (Laura), Andrew (Rachel), Rebecca (Steven), Susanna (Kamran), David, Jane (Zackary), and Mary-Clare; his 19 grandchildren; and all his many other dear family and friends. Peter was born to parents Ellis “Jack” and Edna Blomfield in Ipswich, Suffolk, England, and was the youngest of four siblings. He studied physics at City, University of London, and at the age of 22 joined the LDS church where he met his wife Mary. The two were married in the summer of 1974. Peter worked as a computer programmer and as a systems analyst for British Aerospace for most of his career. He was hard working and well respected by all who knew him. Peter always said he wanted to have a big family, and with having 5 boys and 5 girls his dreams were realized. After 29 years of raising their children in England, they immigrated to Calgary, Canada, where many more adventures were had and many more friends made. Peter had a passion for reading, astronomy, gardening, and dedicated a lot of time researching his family history. Throughout his membership in the Church of Jesus Christ of Latter Day Saints he served in many positions, and was Bishop of his congregation in Bedford, England, for 7 years. Most recently, while still battling with cancer Peter served in the Calgary LDS Temple. Peter always said his “pride and joy” was his family, and will forever be remembered by them for his story telling, his playful nature, his hard working attitude, and his devotion to serving others. His sense of humor was unmatched and could make the dimmest of situations vibrant with a quick pun or a hysterical joke; he kept his family and friends laughing until the very end. We would like to express our gratitude to all the doctors and staff that have treated him at the Tom Baker Cancer Centre. The children would more especially like to express their love and appreciation to their mother, Mary who nursed him at home until the very end. A funeral service will be held for Peter at the Church of Jesus Christ of Latter Day Saints Parkland Stake Centre (14540 Parkland Blvd SE, Calgary) on Saturday, February 25, 2017 at 11.00am. A light lunch will follow. In lieu of flowers the family would be grateful if any donations could be made to the Tom Baker Cancer Centre at http://albertacancer.ca/tom-baker-cancer-centre