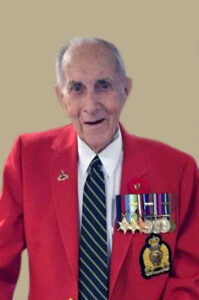 Peter Jones passed away on Wednesday, July 3, 2019 at the age of 94 years. He will be lovingly remembered by his children Wayne (Meg) Jones, of Kelowna, BC, Carol (Les) Stehmeier of Calgary, AB, Kevin (Linda) Jones of Calgary, AB, and Barbara (John) Chaffo, of Naples, FL; 18 grandchildren; 29 great grandchildren; sister Marg Simpson of Sault Ste. Marie, ON; and many more family and friends. He was predeceased by his wife Marie in 2003. Peter proudly wore his red jacket adorned with medals in fond memory of his WWII time spent in the Royal Canadian Navy and then the RCMP. At age 17 1/2 he joined the RCN and was assigned to the destroyer HMCS Huron as a telegrapher. The Huron escorted convoys to Murmansk Russia, saw combat in the English Channel and participated in D-Day. After the end of WWII Peter joined the RCMP and while stationed in Edmonton he met Marie Nilsson from Raymond, AB. She married her “Mounty” and they had four children. He retired from the RCMP after 25 years of service and then worked for the Labour Standards section of the Alberta Government for 12 years. After retiring a second time, Peter and Marie served a mission for the Church of Jesus Christ of Latter-day Saints in the Dallas Texas Temple. He was a volunteer for the 1988 Olympics and served many years as a volunteer tour guide at the Naval Museum of Alberta. Family was a huge part of Peter’s life and he was excellent in his love and devotion to his grandchildren and great grandchildren. A Memorial Service will be held for Peter at The Church of Jesus Christ of Latter-day Saints – Royal Oak Chapel (81 Royal Elm Drive NW, Calgary) on Tuesday, July 9, 2019 at 12:00 pm. Visitation with the family will start at 11:00 am. Interment of the cremated remains will take place at Union Cemetery following the service. If friends so desire, donations may be made in memory of Peter to a charity of their choice.