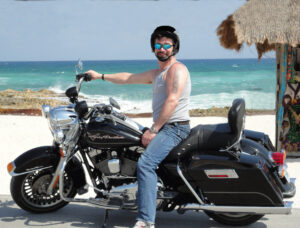 It is with deep sadness that we announce the death of Perry Joseph Kieley on February 2, 2016. Perry was born in St. John’s, NFLD January 30, 1971and grew up a short distance away in the town of Holyrood. After high school, Perry left Holyrood and eventually made his way to Alberta via a short stay in Ontario. Perry was employed as a Journeyman Carpenter through the United Brotherhood of Carpenters and Joiners, Local 2103, a Union man and proud of it. Perry had a zeal for life and his leaving was sudden and unexpected. The thing that rocked his world the most was riding on his Harley-Davidson and the more friends that joined in, the better the tour. His last tour will be a short drive from the funeral home to the crematorium and anyone wishing to follow that procession on their motorcycle is invited to do so (weather permitting of course everyone rides safe).

Perry passed away peacefully in his home and will be forever held in the hearts of his loved ones, family and friends. In addition to all those that knew and loved him and will always remember him, he leaves behind his Mother, Marguerite Kieley, sister, Jodi Kieley, his daughters Natasha Elliott, Savannah Froese and Jess Lovell and his two grandsons Dawson (Savannah) and Huxley (Jess). Perry also leaves behind his love and best friend, Cathy MacNeil.

Perry was predeceased by his father, Edward Joseph Kieley (2009) and sister Stephanie (1982).