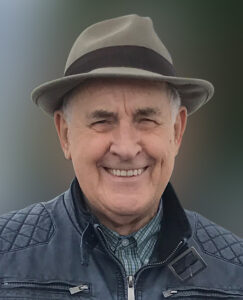 The family of Percy Sykes announce the peaceful passing of their esteemed husband, father, grandfather, and great-grandfather on Saturday, January 27th, 2018 in Okotoks, Alberta, Canada at the age of 82 years. He will be lovingly remembered by his cherished wife, Audrey. They would have celebrated their 60th wedding anniversary on May 31 of this year. He will be greatly missed by his children: Elaine (Jim), Chris, Jane (Jim), Steve, and pre-deceased by Douglas (1982). He set a lasting example for his nine grandchildren: Mike (Jaime), Kevin (Jen), Nate (Khrystyn), pre-deceased by Christopher (1997), Erin (Wes), Makayla (Cody), Anne (Sean), Jimmy (Mary), and Kristi (Nigel); nine great-grandchildren: Mykena, Jayden, McKayla, Lexi, Dreia, Nathan, Ryan, Taylor and Oliver; sister Joan (Pat), sister-in-law Doreen (Wilf) and brother-in-law Malcolm (June); five nieces and nephews. Percy was pre-deceased by his parents Bernard and Frances Sykes; and his mother and father-in-law, Arthur and Eileen Clifton. Percy was born in Wakefield, Yorkshire, England on October 26th, 1935. He became an apprentice printer at age 15, and then served in the British Army. He returned home and shortly afterwards married Audrey Clifton in 1958. One year later the young newlyweds emigrated to Canada (one of Percys proudest accomplishments) on the Empress of Britain and settled in Calgary. Percy began working at The Calgary Herald and during that time he and Audrey began raising their family. He always loved sports and spent many summers at Riley Park playing cricket. In 1972, Percy, along with his family, was baptized into the Church of Jesus Christ of Latter-day Saints. This was the defining moment of his life. Percys entrepreneurial spirit led him to purchase Calgary Instant Printing where he worked side by side with Audrey for eight years. After that, Percy and Audrey served two temple missions in their homeland. This was the highlight of Percys life. Percy had a wandering spirit and traveled with Audrey to many places around the globe. He loved meeting and talking with people and left each person knowing that he was truly interested in what they had to say. Percy valiantly struggled with kidney disease for ten years. He was grateful to his medical caregivers for their care and concern, with a special thank you to Dr. Braden Manns, the South Calgary Health Centre Dialysis Unit, and to the palliative care team at Foothills Country Hospice in Okotoks. Percys pearls of wisdom to his family are “Do the right thing at the right time for the right reason”, “Dont worry about what people think”, “Get an education”, and, the oft-repeated quote from Thomas S. Monson “Work will win when wishy-washy [thinking] wont!” Percys faith and testimony has prepared him for the next step in his eternal progression. A Memorial Service will be held for Percy at The Church of Jesus Christ of Latter-day Saints – Willow Park Chapel (940 Acadia Drive SE, Calgary) on Saturday, February 3rd, 2018 at 11:00 am.