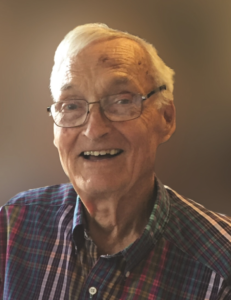 Percy Archibald Baker passed away on Tuesday March 2, 2021 at the age of 91 years.

Percy was born July 24th, 1929 in Prince Albert, Saskatchewan to Percy Herbert Baker of Devon, England and Wife Esther Bertha Baker (Delree) of St. Severin Liage, Belgium. He is survived by his son James Baker (Terri Moon), Ken Baker (Jane Lancaster), Duncan and Lynnea, Stuart Baker (Marta Lucia Montero) Joshua and Katie, Andrea (Aaron Glazier), Sabrina and Tia and sister Mary-Anne Hendel and a plethora of nieces and nephews who thought the world of him. He is predeceased by his parents Percy Baker & Ester Baker (Delree) and brother John Baker. He was raised on the family farm in Red Deer Hill. His mother took him and his brother John to Belgium to meet his sister and maternal grandparents where he learned French. He completed high school at Prince Albert Collegiate in Prince Albert where he boarded. Percy worked on the family farm for a year before deciding attended University of Saskatchewan where he became a Civil Engineer. He worked for Comenco and Imperial oil as a summer student. Upon completion of his degree, he accepted a position with Imperial Oil. Dad met our Mom Grace, at the Rainbow Room in Edmonton. They both were employed at Imperial Oil. They were Married May 12, 1956. Imperial Oil moved them to Camrose where Mom gave birth to James and Kenneth. Percy took a position in Red Water and then Norman Wells. This allowed the young family to get a jump start financially. Our Mom was glad to get transferred from the remote outpost back to Edmonton. Percyâ€™s career then took his family to Toronto where Stuart was joyfully added to the family. Imperial Oil eventually transferred them back to Calgary where they welcomed their daughter Andrea. In 1979 my father encouraged my mother to start her jewellery store â€œDelreeâ€™s.â€ Dadâ€™s career eventually took him to New York to work for Exxon which owned Imperial. He spent two years working in New York. His sons remained in Calgary and Grace travelled back and forth to run her jewellery store. Dad remained in the oil gas for another 4 years before retiring and joining Grace fulltime at Delreeâ€™s. In 1995 my parents were visited by Missionaries from the Church of Jesus Christ of Latter-Day Saints. After hearing the missionaryâ€™s testimony of Jesus Christ and receiving their lessons he and Grace were baptised. Our mother developed dementia and our father became a fulltime care giver taking amazing care of our Mom in her latter years. Percy purchased a motor home, so he was able to take Grace travelling. Our father found great purpose within the Church of Jesus Christ of Latter-Day Saints. He had many callings in the church over the years serving as Ward Mission Leader, at the Family History Center, in the Bishopric in High River Ward and as a Temple Worker. At the age of 75, he moved from Calgary to Cayley purchasing the adjacent 80 acers next to his daughter. During this time, he actively farmed growing crops and putting up hay. He purchased cattle to graze and feed. He also served as Chauffer to Sabrina and Tia and their friends. Family was so particularly important to him. He received much joy from his children and grandchildren. He relished the fishing trip with son Ken and annual camping trips with his sons and daughter and his grand children. In this last year he spent most of his time at home except when out on walks with his all-terrain walker. He also enjoyed talking on the phone and watching the politics and news of the world. His advice and council were often sought by his children, extended family and friends. He was an intelligent, strong and gentle man whoâ€™s Faith never waivered. He is a shining example to all that know and love him. Percy lived a blessed and eventful life and now is joined together again with our beloved mother Grace.

A Funeral Service will be held for Percy at The Church of Jesus Christ of Latter-day Saints – Heritage Chapel (935 Heritage Drive SW, Calgary) on Friday March 12, 2021 at 11:00 am. Attendance is limited. Friends are invited to view a livestream of the service by selecting the Watch Event link below.

Graveside services will be at Edenbrook Memorial Gardens following the service.