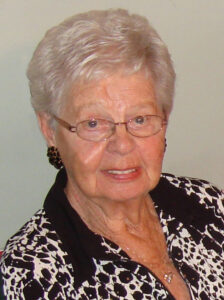 Our dear mother, grandmother and great-grandmother was released from the burdens of this life on Sunday, May 15, 2016 at the age of 91 years. Her humble start in life was in the southern Alberta town of Stirling, moving to Jefferson where she completed school. At age 16 she met the love of her life Alvin Bietz, who was called off to serve in the RCAF during WWII. During the war, Pauline moved to Toronto and worked as a riveter building aircraft. Upon Alvin’s return, they married and lived in Calgary where they raised their family. Four “fabulous” daughters joined their family and Pauline was a wonderful mother and homemaker. With her remarkable talent of sewing and a keen sense of style she kept those girls dressed in fashionable clothing right through high school graduation. Pauline was modest in nature, but had a keen sense of aesthetics. She loved to weave her favourite colour of red into her surroundings, whether it was the front door of their home or a statement in the car they drove. The elephant held a particular place in her heart and she had a vast and interesting collection of elephants. Pauline and Alvin cherished the time they spent annually in Hawaii, enjoying the weather, flowers, beach, golf, sunsets and friends. Her real passion was for her family. She was a dedicated wife to Alvin and supported him in all he pursued. She cared for their daughters, and when they married and grandchildren came along, took every opportunity to actively help and engage in their lives. She was steady by nature, always wore a smile, was generous, kind, caring, loving and her happy nature lifted any room she entered. She really loved life. We will miss her wisdom, guidance and mere presence in our lives.

Pauline was predeceased by her husband Alvin in 2010, daughter Terry Anne in 2013 and three siblings Grace West and Dennis and Clinton Pierson.

A Memorial Service will be held for Pauline at Southwood United Church (10690 Elbow Drive SW, Calgary) on Friday, June 3, 2016 at 2:00 pm with Rev. Ed Lewis officiating. Messages of condolence may be forwarded to the family at www.piersons.ca. If friends desire, memorial tributes may be made to the Alzheimer’s Society, the Southwood United Church or the charity of your choice.