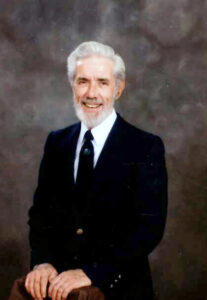 Patrick ‘John’ Crorken passed away on Sunday June 30, 2019 at the age of 87 years. John is survived by his loving wife of 60 years, Jessie; daughters, Helen (Walter) and Elizabeth (Thomas); grandchildren, Christopher C., Mary-Anne, James, Alexander & Christopher D; great-grandchildren, Blake, Liam, Linden & Madison. John was born in Glasgow, Scotland to John Crorken and Lizzie Stewart. He met and married the love of his life, Jessie Colquhoun. As a young man, John joined the Merchant Navy. During that time, he had the opportunity to travel and see the world. When the girls were school aged, John and Jessie relocated to Ontario before settling in Alberta. They became involved in many activities in their community including Scottish Country Dancing where they were both Board Members and John was an instructor. John worked as a tool and die maker. He possessed an engineer’s mind and attitude. He loved to make and build things which he made sure were of the best quality and built to last. He was stubborn and hardworking but also had a soft side. He enjoyed and appreciated spending quiet, down time just being in nature. He will be missed by family and friends in Calgary and Scotland.