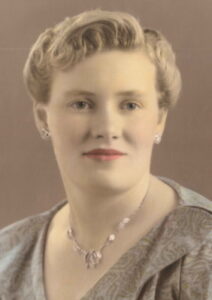 Patricia Laine passed away peacefully surrounded by family on Tuesday, November 9, 2021 at the age of 90 years at the Foothills Hospital.

Patricia was predeceased by her husband, Fred; son, Kirk; sister, Marie and brothers, Robert and David.

Patricia was born to Frank and Edith McBride and was the eldest of eleven siblings; Patricia, Judy, Nancy, Donald, Frank, Raymond, Peggy, David, Robert, Helen and Marie. Patricia and her husband Fred had four children of their own, Robin, Darcy, Kirk and Brad whom she loved dearly. Patricia was a very strong women and worked very hard. She spoke what was on her mind and tended to be very blunt. She liked to spend her time with herself but always loved the casino. She will be missed by all those she left behind and she will always be in our hearts.